Morning after the night before

Woke up with the beer munchies. I'm not really a breakfast person, but I was really looking forward to a leisurely feast in the hotel. Whilst demolishing a man-size portion of fruit n fibre, we were joined by three fellow Deerstalkers who were staying there too. After a brief chat we discovered that they were training for the Marathon de Sable 2009. Very admiral. Puts our boasting about the WHW into perspective. Well, if we could all run as much as we could talk, we'd break records. We gibbered for nearly two hours about training, races, blisters, nutrition, sports drinks, trainers, socks, fundraising, blogs, chaffing, hydro packs, gadgets...you name it, we covered it. The poor lady who run's the B&B thought she was never going to get rid of us. 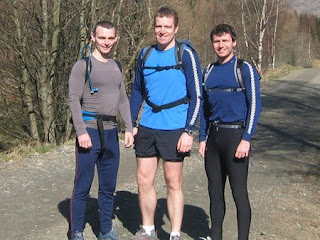 We headed home - in a car which looked more like a tractor - and stopped at the cinema en route. Very bad move. We went to see Be Kind Rewind, which is officially the worst film I've seen EVER. Actually, it's takes second place only to Sunshine. Both Marco's choice, so I think I've banked a few chick-flicks now.
Posted by Debs M-C at 21:06

I liked Sunshine and it gets a solid 7.3 on IMDB. Dare one suggest you are pretending not to like these films in order to force Marco to sit through your chick flicks? ;)

At least he takes you to the cinema. The Runner won't watch any film unless he's in it!!

Hmm, Sunshine gets some pretty stinking reviews too on IMDB.

Muriel and I enjoyed Juno the other day. Worth seeing.

To be fair, Allybea, I think I've seen my quota of Ian's debut movie too. I had the pleasure of Mark Hamilton's the other night. Need to be selected about evening viewing, as Marco keeps dreaming about Dario!

Tim - seen Juno, which I like too. Go see Rambo, it rocks!

And as a special treat, I'll make sure there's lots of singing in it ;-) x

Yeah I keep dreaming of Dario.... He keeps saying "...And the winner is...." then I wake up.
Actually I did have a dream about Dario after watching the Mark Hamilton video. It was scary. The dream more so than the video.

Anyway thanks for telling everyone our bedtime secrets babes...:-(