It's ONLY twenty miles

The last long run and start of the three week taper has always been the highlight of my marathon training plan. Until this year that is. Now it's just another 20-miler - albeit slightly faster. After all I'm still considering the extent of my participation on next weekend's WHW training run. The gang are running the 43 miles of the Devil o' the Highlands route from Tyndrum to Fort William. I've already decided against the full run, as it's far too close to London. Everything's going to plan just now, so I'm a little wary.
Anyway, today's run was a belter and filled me with loads of confidence for a good marathon time. Just need to make sure the sun doesn't make an appearance on the day. I felt really comfortable all the way round and felt there was loads left in me at the end. 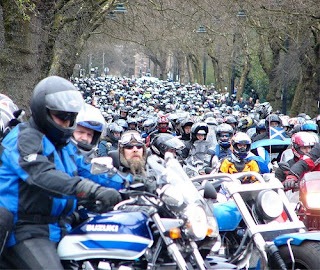 Took in a route from town over the south side and then round the west end. Even managed to catch the bikers out on their annual Easter jaunt for Yorkhill. Pah! I'm running 96 miles to raise money for Yorkhill - feel free to sponsor me - but they've probably got the right idea. It was pretty spectacular to see thousands of bikes going through the streets of Glasgow. I bet the motorists weren't so excited about it though.

Yep, if I were you I'd not be running the full 43 miles on the training run. Much better to focus on the more immediate goal - tanking your PB at the London! Good luck.

Just for the sake of balance you understand, I'd say, forget your London PB, keep your long term goal in mind! ;-)

Just watch out for warm weather in London. London can be very tricky as us Scots tend to do all our training in cool/cold weather and when you hit London, it can be a *lot* warmer so you need to adjust your goals appropriately.

Naturally I hope that you *do* run a PB but be prepared to downgrade that goal if the conditions aren't right.

I'm turning into such an old woman these days. ;-)

Ok Mrs Debs,
The last time I was this close to hairy arsed bikers I was on the receiving end of their boot as they volleyed me off my Lambretta, they were the days,"We are the Mods"Quadrophenia and all that, of course you would have been in Primary One then,looks like another PB is on the cards,makes all the hard work worthwhile. Good Luck!