Today I spent the afternoon swinging about on trees. Perfect. A bit of corporate team building at Go Ape in Aberfoyle. Wow! What an amazing adventure it was. There's a brief safety and equipment demonstration before you set off - so you're on your own to get round the course. 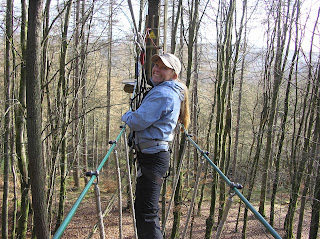 The 2-3 hour journey starts with a 300m zip wire across a gully to the site. As I watched the other harness themselves up and shoot across, I was eagerly awaiting my turn. I've only ever zip-wired once and that was off that Great Wall of China. I don't know if the flying fox at Blairdrummond Safari Park counts? Anyway I set off at a good pace and then started slow down, coming to a stop about 3/4 across. One of the guides had to come and rescue me. Great start. Apparently I was too light, so "there's no drag". The assault course is a riot. Lots of scary bits. I only had a brief flaky moment and bungee-jump-like bit. I was covered in mud and my hands were burnt, but I 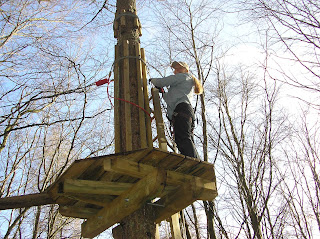 had a ball. To finish we had to zip-wire back over. Guess what? I got stopped half way across. At least I kept everyone entertained.
After all the fun, I still made it back in time for tonight's training run. After a tempo run on Tuesday and 10-mile tempo last night, I was looking forward to a steady run with the troops. That was not to be. Coach Lesley had reassessed the packs and moved me up TWO groups. Felt like slightly out of my depth, as pack G are much faster. Plus I had two tempos in my legs and London in three weeks. Hey ho, what Lesley says, goes. Off I went with the hope of at least sticking with them for four miles. Actually I managed six before they pulled away for the final mile. Got a bit to go, but it gives me something to aim for. Plus the "promotion" helps with my confidence and self belief.
The route took us on the tour de west end - down Crow Road, Dumbarton, up Gardner, Highburgh, Byres, Clevedon, Kelvindale, Maryhill and back to the Garscube Estate with a total distance of 7.47. Finished in 1.01.26 with an average time of 8.13m/m.

Hi Debbie - very interested in the freebie offered by Go Ape. Care to share more details of the trip in an e-mail to newfarci at gmail.com?

Sounds like you are well on your way to a good London performance. Keep it up, and resist the wine and pistachio nuts ... (well not all the time)

Hi Debbie, sounds like you're running well (which is always good) but just a word or caution from one who has missed the start twice, try and keep in mind what your main objective is for the year.

Is a good London time more important that making the start line of the WHW? As long as you're getting the miles in there's nothing wrong with running a bit slower if it reduced the chance of injury. Just don't be pushed into doing things by folk who don't have the same long term goals as you.