IAU 24 hour world champs: The good, the bad and the ugly.

I'll spare you the lap-by-lap or hour-by-hour breakdown.  Not only because it will tips us both over, but mainly because all the miles and hours merge into one.  Especially now it's two weeks later and I've missed the window of opportunity to bore you to death with race details.

﻿
﻿In summary, it started well, got better and then when rapidly downhill from about 21 hours.  I thought it would be good to summarise into good, bad and ugly categories.

Being selected to represent Great Britain was an honour and privilege.  It's been my main focus since the lovely Richard Brown planted the seed after the Commonwealth 24 hour.  I never really got to grips with running for Scotland, so joining the GB team hadn't even entered my crazy thoughts.

The kit bag.  Ah, the kit bag.  So wonderful that I had to take a snap of the goodies in all its glory.  It was like Christmas when it arrived.

The matching accessories.  Of course all of that lovely - and free! - kit gave me a pass to spend my well-earned cash on other things.  So much so, that I thought I might need post race therapy for a spending addiction.  There were matching trainers, socks, arm sleeves, caps, buffs, base layers, hair accessories and even a shoulder bag. Not too mention brand new toiletries and first aid supplies. 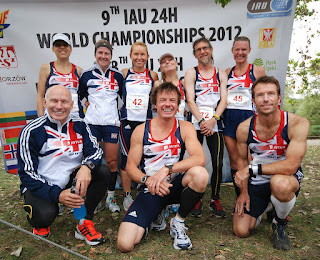 Team spirit.  The troops may dispute this, but we gelled so well as a team.  Task in hand aside, it was just a bloody weekend.  Lots of laughs - and tears! - and amazing support.

Pre-race status:  I had worked hard this year. Punching above my weight with the boys with the jet propelled legs at lunchtime sessions.  I've done a lot of speed work and and lot more long runs.  Going into the race, I was definitely the fittest and strongest I've ever been.  Now, of course, I'm back to square one.  Funny how we train for months and months, just to go out and destroy ourselves.

The weather was perfect.  I started my usual panic watching about a month before the race.  That's quite fanatical, even for me. The Polish weather is quite erratic. Jumping from 18 degrees one day to 30 the next.  Thankfully, someone was looking after usand race day was the optimum temperature of around 16 degrees.  Perfect vest wearing conditions.  Even the night temperature was comfortable.   Although I didn't get to try any of my matching accessories.  Hey ho, my post trip washing has never been so light, as I wore one race set and same track suit for four days!

I really liked the course.  I know it was only my second 24-hour race, so I've not got much to compare it too.   I know quite a few athletes has issues with it.  I'm sure I could come up with a few, but the pros outweigh the cons.

Prizes:  I was the second counter in the ladies' team which took world bronze and European silver

World-class:  It was simply amazing running in the same the circles (quite literally) as some of the best 24 hour runners.  Mike Morton was truly magnificent.  Our very own Emily Gelder (who won the ladies bronze) was outstanding.  As she lapped me again and again she was very chipper and supportive.  She did tell me she was "getting in the miles early" and she slows towards the end.  I never at any point saw any sign of slowing.

Team tips:  I'm a bit wet behind the ears when it comes to 24 hour running - having only done one before - so it was great to get some valuable advice from some of the pros.  Emily gave me some sound race nutritional advice, which I'm keen to try out.  And JP gave me some footcare and muscle strengthening tips.


Sonic's support station was outstanding as always.  Apparently the team managers were delighted he was part of the crew as no one else could understand what the Gibbering Midget and I were saying!   Also big thanks to Sir Richard, Adrian, Eleanor and Guy.

I live in a street full of curtain twitchers (yes, that's you Gary).  Take the wheely bin in a pyjamas and everyone sees you.  Leave the house in GB tracksuit and there's not a soul in sight! :-) Although arriving at Edinburgh Airport in fancy dress certainly attracted a lot of attention.  When the GM nipped off to the ladies for a pre-flight "make sure" a nice lady in the queue behind me squealed "oooh are you back already?".  As I was explaining we were off to Poland for a race, it suddenly dawned on me that she thought we were coming back from the Paralympics!!  And that's how you deflate one's ego.   Lord knows what she would have made of it if she saw us on the return journey.

As I said, I liked the course, but the downside was the lighting.  The park lamps didn't provide sufficient lighting.  Especially for tired runners on uneven and cobbled surface.  There was a dip at the far end of the course, that I managed to overstep quite a few times.

My quads ached from about 16 hours and left knee went a few hours later, forcing me to walk for the last three hours.  I need to work on getting past 21 hours without something falling apart.

Even by standards, my eating was atrocious. After the first 7/8 hours, I couldn't stomach anything. Although I have learned that soya chocolate milk is a great choice.

We lost out of the World Silver and the European Gold by a mere 42 metres!!  What is 42 metres between three runners, over 24 hours and hundred of kilometres?  The difference between gold and silver, that's what.  To be fair, the French team worked really hard in the last hour to get it.  And I blame myself for letting them take it.
I need to work on my 24 hour mindset and my self-imposed limitations.  I am just so used to running for a set distance, rather than a set time.  This time I was going for 140 miles, but would have been happy with anything above 132.  Once I knew I was going to break the Scottish record - with lots of time to spare - did I allow myself to take the foot off the gas? At the time, I know I worked as hard as could.   But now, I can't help but thinking I should have push myself harder.   I suppose hindsight is not always a wonderful thing.

My feet were a riot. Not surprising though, as - if anything - my feet were always going to let me down. I'd thought ahead though as bought a pair of trainers which were 2.5 sizes too big (great idea) and some bunion plasters for my usual hot spots (even better idea). In the latter stages of the race - after my knee - had gone I felt a stone in my shoe. I couldn't work out how a stone had got into my shoe, but stopped to take it out. Only to discover the stone in my shoe was in fact my big toe nail. As it was still attached to a bit of skin  my only option was to tape it back for the duration of the race. My lord it was agony though. And then an hour later the same thing happened with my other big toe nail.

The portoloos on the course were pretty rank.  Event portoloos are frightening at the best of times - I much prefer to go al fresco - but add in 250 athletes who will no doubt have some stomach issues at some point in the race, and you can just imagine.  During the hours of blackness, they were pitch black inside.  An athlete who had a problem with their aim in the dark had crapped on the shelf next to the towel bowl.  Of course on my next visit I used the shelf to help lower myself onto the seat and put my hand in human excrement!! Not my own I should add. That was my lowest ebb.  Seriously, I couldn't think of anything worse.  Apart from actually sh*tting myself that is.  Every time I think of it, it sends shivers down my body!

There was high drama after the event, when the awards' presentation was moved and dragged on for hours.  I won't go into details, because I'm sure the organisers have had their fair share of grief.  They did try their best to calm the situation by feeding us dinner, but I couldn't eat because the roof of mouth hurt so much, the GM was vomiting and the rest of the crew fell asleep at the table.  Anyway it was nearly 7pm (the race finished at noon!) before we got back to the hotel.

I had a quick shower then fell asleep mid text sending.  I woke up a few hours later bursting for the loo.  It probably took me the best part of 15 minutes to get to the toilet, but I couldn't bend my knees or hamstrings, so ending up peeing down the back of my pyjamas.

And that, folks, is why ultramarathon running is not an Olympic sport.
Can you imagine Wills and Kate cheering on Team GB at that?