Back to the future

For reasons which escape me, I've gone full-circle and I'm now training for a 10K. I'm not sure which 10K yet, but it will/could be sometime in November. That's even if I do a 10K. Let's just say, I lack direction just now. But I kinda like it that way for a bit.

I'm following (ish) Mark Johnston's - leader of Sonic's lunchtime group - training plan during the week. And just doing what ever takes my fancy at the weekend. Monday/Wednesday are speed sessions, Tuesday/Thursday are eight miles steady and there's an optional "strides" session at Glasgow Green on a Friday.

Last week, I resurrected the Baby Jogger training. None of this faffing about running ultra-distances - time to get some really tough runs in. The Baby Jogger has been hiding in the garage since we moved house in March. Mainly because divvying up running time between us is not as difficult as originally anticipated and Cairn isn't exactly the daintiest of infants.

Last year, taking Cairn for a spin round the country roads of Alexandria was quite a joyous experience. If anything, tackling the undulating routes always kept the farmers entertained. Cruising through Knightswood doesn't have the same appeal. Granted I headed up to the canal path, but I had to pass the high-flats on Lincoln Avenue on the way. That raised a few eyebrows. I'm sure the observers would have muttered their opinions, if any of them could actually speak English.

On to the canal, the idea was to do six miles (three miles out and back). But my delightful son decided to drop his favourite blanket (the only thing he sleeps with) at the turning point, so I ended up doing 12 miles! I'm sure he was giggling like Mutley.

On Wednesday, I went out with the boys with the jet-propelled legs for the (as above) 5 x 6mins session. Dear god, I was practically on my knees by the end of it. Thursday night was 6 miles steady with the club. I wouldn't recommend doing this after a few glasses of wine at a work lunch.

On Saturday, I'd signed myself up for the West Districts Cross-country in Rouken Glen Park. In my defense, at the time I didn't realise it was a relay. That came as a bit of a shock. Not only was I running a cross-country race, but I had to RUN as my team position depended on it. In fairness, I think I was only there to make up the numbers, but it was quite daunting to see that every other Garscube girl was considerably faster than me. Considerably. 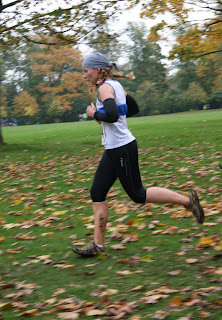 I've always kinda mocked cross-country. I've never quite understood how people could take it seriously. I'm not sure whether it was the shock from going from ultra-training to racing 2.6 across muck, but I was well and truly f**ked. I literally thought my eyes were going to pop. As I lay sparked out on the grass, I vowed never to mock cross-country again. Respect. 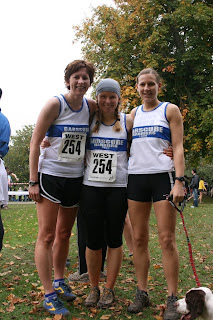 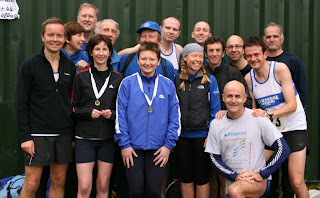 Team shot above. Cairn and Dr Crazy German below. 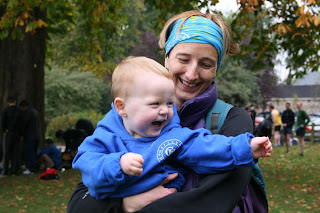 On Sunday, I took part in Milburn Harriers 10 (and a wee bit) mile handicap race. The course follows the Balloch Horseshoe, which is one of my favourite routes. I love the rolling country roads and amazing views. I could have easily talked myself out of the race if it wasn't for that fact. Plus, Sonic had gone out on the hills with the Crazy German at 6am, to allow time to get to Alexandria to takeover Cairn watching duties. In true Consani fashion, he made it in the nick of time.

At my allocated starting time, I was set off with two Milburn blokes. They went belting off, like they were being chased by the Vale's finest. Great. Day-two of a weekend's ass-whipping. Fortunately for me, by mile three (and where the hills began) the gap was closing and I passed them both at mile four. I was glad I stayed steady at the start, as I felt great on the second half, picking off runners as I went. NB: This only ever happens to me on very long races or handicapped ones. 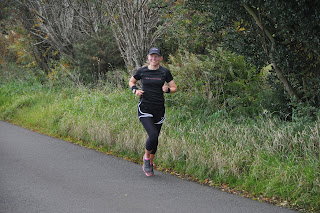 The Wee Nessie - for pre-school kids - as part of the Loch Ness Marathon and Festival of running.

Before you report us to the appropriate authorities, please note this was just a bit of family-fun.

Who's dulcet tones do you hear from the crowds?

Given the wet conditions, this could have doubled-up as his first cross-country race. 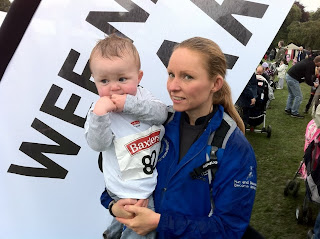 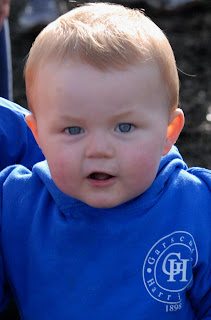