Well, dear reader, it has been a testing time. The house move dilemma (after the whole selling and buying palava) was a load more stressful and exhausting that I expected it to be. The new abode is a project-and-a-half. We've ripped out the bathroom, stripped all the walls and floors and basically started again. After, of course, putting in a new heating a boiler system. Which we later discovered was too powerful for some of the old pipes, so they burst and flooded the kitchen. As of today - nearly four weeks down the line - every room is half finished. Although we now have a fully functioning toilet and shower. Trust me, that's exciting.

Then there was the bug we all managed to catch, courtesy of Cairn - although Cairn was by far the worse. There was mucho puking and nappies that would test even the sternest stomach. On top of that he had tonsillitis and an ear infection. It was awful to see him so ill, but he was such a wee trooper throughout it. He would even lift his tired wee arms to blow kisses...as his Mother disappeared out the door to get the miles in. BBF, here I come.

Although I've been trying to stick to the training schedule, there has been many "resort to plan B" occasions.

On Saturday, March 21, I set out for my planned 42 miles from Tyndrum to Fort William. Silke was starting at BoO and doing and out-and-back and Sonic and the Crazy German were doing the reverse from Fort William to Trydrum. Car pull sorted...or so we thought.

After struggling to eat for a few days, the tank was already empty before I'd even set my watch. I couldn't even stomach breakfast that morning, but thought I'd fuel on the run. The first 8-10 were a struggle and I really noticed the difference going up the Drover's Road onto Rannoch Moor. Although it's a testing incline, I can generally trot the full distance. I was reduced to a stop-start and the lack of rhythm was quite frustrating. The heavy rucksack wasn't helping either, as it was a suffocating as a small child on your back. By the time I had hauled my sorry ass out of the Moor and met Silke in Glencoe, I was gone. I forced down a total of four jelly babies and planned to call it a day a Kinlochleven. Of course, I could have curled up in front of the fire at Kingshouse, but there was still a teeny weeny bit of fight left in me to tackle the Devil's Staircase.

I met the Crazy German just outside Kinlochleven who informed me Sonic has thrown in the towel after 10 miles and was walking back to get the car. The Crazy German was knackered after his super fast performance in the Double Marathon, so he headed back with me.

So what started out quite ambitious, ended with the Crazy German and I on a bus to Ballachulish, with a broken Sonic coming to our rescue. Silke was the only star of the day! Thanks for taking one for the team, Doc.

Although 28 miles on four jelly babies has got to help train my body to run-on-empty?

Since then things have got slightly better...

Last week I had a few good mid-week runs, but on Friday night I decided to have a few wines (OK, I nearly polished the bottle) and spent most of Saturday spewing. Self-inflicted? Possible. But did I really deserve that on a bottle of 8% wine? Bet the Subversive one is choking with laughter at concept of something so weak. After spending the morning bonding with a bucket (remember I didn't have a toilet then) and just about managed some toast and soup for dinner.

So Sunday's planned 30-miler started - again - on empty. I decided to give the Balmaha-Inversnaid-Balmaha a bash, knowing that I couldn't handle another DNF. Despite the obvious, I felt remarkably good. I was only 10 minutes behind Sonic and the Crazy German at Inversnaid - after meeting up with Bill Maxwell and running with him for a few miles. Having a bit of company makes such a difference, doesn't it?

I had swapped my usual rucksack for a Inov-8 bumbag. I'm not usually a fan of anything round my waist, but after last week's suffocating effects, it was a welcome relief. Again, I carried more food that required, as this week I only managed 500ml of coke. Despite it's bad press, coke has magical effects :-) It's certainly my ultra-running tipple of choice.

I really only hit a lull after Sallochy Bay when the energy reserves were below the healthy stage. My legs still felt really light though. I finished in 5:32, just 26 minutes behind the boys. They claimed to have been taking it easy, but really I just ran to how I felt. Super Silke has swapped her role as team trooper to babysit Cairn, so it was a lovely welcoming party.

So this week, it's all about the D33 in Aberdeen on Saturday. The weather isn't looking very promising, so we'll see what happens. Given that the race organiser is the most mental person I know, I doubt a call-off will be on the cards.
Posted by Debs M-C at 20:10 10 comments:

I've had a few cracking tempo runs in the last few weeks. Two mile warm-up and then five-miles of tempo..all courtesy of the new Glee soundtrack. I defy anyone not to up the anti to Halo/Walking on Sunshine mash-up. I was practically running along the side of walls.

The next week or so is going to prove quite challenging, as we're moving house on Friday. The new purchase is a project and a half.

I'm taking tomorrow off work to pack, as I've barely put a dent in it. I'm sending Sonic to work and Cairn to nursery, so I can get peace to get on with it.

You know how I'm convinced Sonic does certain things to get out of certain chores? Like how he puts the bowls face up on the draining board after washing up. Well, this is a little treasure. I know I shouldn't mock him after he (by his own omission) saved my life on Saturday, but this is too good to pass up.

After using half the bubble-wrap supply to careful pack away his X-box, he marked the box "Breakable". When I pointed out that maybe "fragile" would be more appropriate label he actually tried to clarify the difference between breakable and fragile...And then tried to rectify is by drawing a wee smiley face. 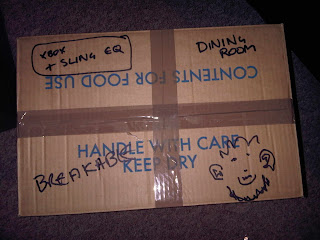 Yep, you got it, he's going to work tomorrow. And if he plays his usual cards, he'll get in lots of training over the next week or so.
Posted by Debs M-C at 22:10 4 comments: