A race report about running 402 (and a bit extra) laps around a 400 metre track.  Where do I start?  If I’ve got your attention thus far, I’ll try and spice it up a bit.  I promise it won’t be a turn-by-turn account of the day, but hopefully a tale of not shit-quitting when things weren’t working out the way I wanted them to. 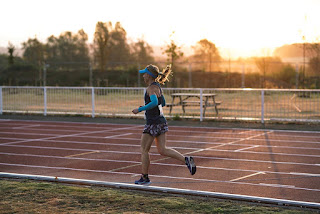 So firstly let me delve a little into how I found myself running in circles again, after swearing on everything I loved and possessed that I would never – like, ever – repeat such a torturous and pointless endeavour.

I still hold the Scottish 100 mile record of 15:48:18, which I set at the World 24 hour Championships in Poland in 2012.  I went on to run 217km that day.  It doesn’t take a mathematical genius to work out that I completely detonated at 100 miles and I when wrote a post on 24 hour running (link here) this race featured quite highly on what not to do.

I’m not really one for “records”. Yeah they’re nice as a target and focus, but they are there to be broken.  I just wanted another crack at setting an official 100 mile personal best for me.  Not on a trail and not a time that’s on a spreadsheet on someone’s broken laptop somewhere. Yes, I’m seven years older, but I’m not ready to give in yet. 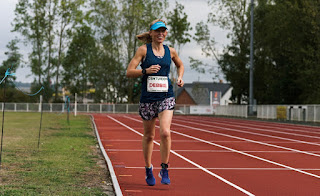 Although following in the footsteps of the some of the classics from the 70s and 80s, this is a relatively new format for the modern day British ultra-running scene.  It is billed as “An elite level event, designed for runners to compete under the fastest possible conditions and with a focus on record setting” Unlike other track ultras, which are time based 6, 12 and 24 hours, this was for 100 mile distance only.

With a 17 hour cut-off the entry criteria is relatively strict.  James, Adrian, and Andy retrieved all the stats from the aforementioned rusty laptops and the all-time top British 100 miles performances for men and women and women were compiled and can be found using this link.  There was also qualifying distances from 100km right down to marathon.  The latter being sub 2:30 for men and sub 2:55 for women.

Closer to race day the start list dwindled. Injury and other focuses took their toll and on race morning there was a reduced field of just eight.  Six men and two women.

At 6am, we were off.  I was acutely aware that I would come last, but I doubt there’s any shame in coming last with a 16+ hour 100 mile race. When Tom Payne lapped me about four times in the first 17 minutes, I knew it was going to be quite the showing up.  He runs a 2:17 marathon, just to put his pace into perspective.

I settled into my own pace.  Control the controllable.  My aim was to run around 2:15 minute loops and I was lapping them on my watch in an attempt to “run the lap I was in” Something which I kept muttering to myself to stay present.  The prospect of running 402 laps is enough to blow anyone’s mind.

Of course it soon became so difficult to distract myself from the clock that didn’t seem to move.  There was a TV screen monitor, a large track side timer and a massive clock on the outside of the building.  Basically it was unavoidable. Like passing a car crash on the motorway when you try not to look, but you simply can’t resist

My planned 2:15 laps were most frequently 2:10, which I know is only seconds.  But that’s 20 second per mile faster so is a fair bit quicker, but it felt ok.  As expected, my stomach was letting me down and many toilet stops later I felt a bit drained.  This is pretty standard for me now.  My stomach and subsequent nausea is my biggest let down.  But to be honest, I’ve had it way worse and had learned to manage it the best I can.

After only a few hours my head was starting to waver big time.  I just couldn’t shake the negative thoughts tapping on my head. Like a psycho woodpecker trying to wear me down.

She convinced me to go back out and try and work through a few more laps.  Gave me some music and AirPods and sent me on my way.  A few laps of musical distraction and I was starting to calm down.  Making myself promises and mini targets.  If I got to 100km in a certain time, I would continue.   If I get to 80 miles by 12:30, I’d have enough time to finish within the cut off.  Trying to break it down to little segments.

I was even ‘treating myself’ to toilet breaks once I covered a certain amount of time.  I know, living my best life. Then I got my period.  Sorry, lads.   I know even in 2019 it’s still a taboo, but it still happens and for some it’s the worst case scenario.   I’d be lying if I said it effected my race, because it didn’t.  The worse part was that it handed me a get-out-of-jail-free card.  That could be my perfect excuse for stopping!

The battle between the crushing urge to stop and my conscious screaming at me not to shit quit, was quite overwhelming.  Physically, there was nothing wrong with me, but I always believe that psychological stress is harder on the body that physiological.   I had to call on everything, to mentally keep myself going.  I coach a group of junior girls at my running club.  They all knew I was running this and I couldn’t go back on Tuesday night and tell them I just couldn’t be arsed.  This was a group set up at Garscube Harriers to specifically stop preteens and teenage girls leaving the sport.  As their coach, trying to teach them about commitment and resilience, what kind of message would that be?

By that point, Jess Gray had already been benched with sickness and stomach issues.  It looked highly unlikely that she would come back out.  Maybe it’s ok for the guys, but the 17 hour cut off doesn’t really allow for huge bad patches.  If I quit, then no women would finish the race.  That’s dismal state of affairs.  I had to do it for the sisterhood.  OK, in hindsight, I know that was jumping the shark at bit, but I was in the deep hours of funk at that point.

I’d always thought the race was about personal goals and achievements, but I think was kidding myself.  Without any direct competition and women to race against it’s incredibly difficult to bring out the best in yourself.  When shit hits the fan (literally) it’s easy to take the foot of the gas when you just need to finish to win.  That’s not a race, that’s a participation certificate.

“You don’t know until you try”, which is fast becoming my go-to motivation in races and life, was churned out over and over again.  There was some heavy chucking going on, breaking it down to five miles and then 30 minutes.

I wasn’t even at 80 miles when the phenomenal Tom Payne was belting around his final lap.  Fantastic running from an amazing athlete.   What was more phenomenal was that I was struggling to take in fluids and he was eating croissants while consistently dropping 7s. I stopped to applaud him across the time.  Mainly to mark his amazing achievement, but it also meant I could have a wee break 😉

I knew by then my targets of sub 15:48 were off and had to focus on getting the job done as quickly as I should, but I wasn’t eating anything.  I really struggle to eat during races, yet I always seem to find a new level of awful. I had one avocado wrap, four Party Rings and two Maurten gels. The latter was uploaded trackside. The rest was just ActiveRoot, Maurten and Coke.  Hindsight being the wonderful thing that it is, tells me I should have taken on more liquid calories.  Don’t tell Sharon she was so right.

Watching people finish spurred me on to get the job done. When I was into the last 10 miles, I started breaking the miles into section of four laps.  It forced me to run the lap I was in.  Even though it was only four, I was so wasted I kept losing count.  I was muttering the number over and over again and it seems to help make the laps tick by.  Why didn’t I use this strategy early?  It was much easier to mentally handle.  The last 10 miles were actually the happiest and most content I was all day.

I had the track to myself for the last hour.  Which may have seemed awkward, but everyone there was so great.  I was aware they were trying to subtly clear up without drawing my attention to it, but I really wasn’t bothered at all.  I know they are volunteers who have lives and homes to go to.

There were large parts of the race that I didn’t think I’d ever get to the finish.  And many more parts I didn’t even want to.  In the latter stages even finishing within the cut off seemed out of reach, despite Sharon and James’ constant reassurance.  I finished in 16:21:03.  My GPS tells me I spent 50 minutes not moving, which really bothers me. 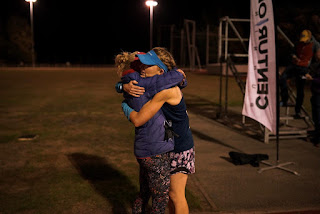 I always harp on about races not being about times and positions, it’s about giving it your everything on the day.  As with most things in life though, knowing what is so glaringly obvious and listening of your own advice is so hard.  Especially when I’m my own worst critic.

I know I had to work through some dark times out there.  I know it shows strength of character with how I reacted and responded to those dark times, but it doesn’t mean I didn’t crucify myself afterwards.  Initially I was really proud of myself for finishing, but once to endorphins wore off, the coulda/woulda/shoulda thoughts crept in.

Like before, I vowed many times that I would never ever run on a lapped course again.  Repeating races just to chase a faster time can often be soul destroying.  As I demonstrated on the track, when you lose sight of the goal it’s so hard to continue when ‘just a finish’ seems almost pointless.    I’m wavering a bit on the promise.  The call of a rematch with my head might be too hard to resist, but for now I’ve got lots of nice trails and hills to hit over the autumn and winter.

An absolute pleasure to be out there with such a great bunch of guys.  Thanks to Centurion Running for putting on another fantastic event. Much love to the volunteers and lap counters.  Thanks for my ever-patience Coach, Paul.  Last but not least, to my amazing bestie Sharon for travelling all that way to not feed me   She said I looked miserable all day, but the photos suggest otherwise, Sharon! Pain is temporary, race photos are forever