Fret not, I haven't delved into a life of family-size bars of chocolate or banana pizzas yet. I'm still alive. And I'm still keeping pretty active. I haven't blogged for a couple of weeks because, quite frankly, I've got nothing much to write about. There's no variety to my training, no new route or glorious hills. Just me plodding away with no real goals. No pace or distance drivers. I just want to stay fit and run until my body tells me otherwise. If I can continue to run a few miles a few times a week, then I'll be happy. I still have to endure the disapproving looks of those who don't agree of pregnant exercising. I nearly lost the rag with someone at work who hissed "that's so DANGEROUS" when I told him that I was still running. I was very close to screaming: F-k off. But managed to smile and control my boiling blood and remind him that as long as don't raise my heart rate too much and it doesn't hurt then it's perfectly safe...And then called Sonic and called said person everything under the sun.

I suppose like all pregnant gals, I do get a worried in case anything I do does harm the baby. If (heaven forbid) anything were to go wrong, then the fingers would point at my active lifestyle. Right now I'm just going on the basis (and fact!) that maintaining a level of fitness is good for me and the baby. And for every negative person, there's a positive person patting me on the back for not sitting with my feet up watching soaps.

Now at week 24, my body is telling me (OK, forcing me) to slow down. When I'm at the gym, I've turned the levels down a notch and I'm limited to around 10 m/m when running. I can really feel the extra weight taking it's toll. I've put on 15lbs! Yes Sharon, I've finally tipped the stone mark. I promise I'll never smirk at a overweight or big-busted runner every again. It's tough. Even stairs are a struggle.

For once in my life, I'm not obsessing about food. I am trying to eat healthy though. But without the calorie and fat content counting. I'm eating a lot more bread and cereals than I normally would, but I've really cut down on protein. Before I usually always had chicken or fish for dinner. Now the only time I eat it is between two slices of bread. I suppose I've just gone off it. I don't have any cravings per se. Personally I think that's a bit of a myth. I just like some foods more than others just now. The body is a very clever machine and will let your know what you need. I may have to wean the baby off cottage cheese and spaghetti and toast though.

So onwards and upwards - or outwards in my case. All is well in Camp Consani. Sonic is still getting all my pregnancy symptoms, but he's soldiering on. What a trooper :-)
Posted by Debs M-C at 10:09 11 comments:

Back from Vietnam. Had a fabulous time. The trekking was pretty challenging in 100 degree heat, but I lived to tell the tale. Actually there's a full holiday tale in progress - once I get round to writing up my travel journal. Watch this space. In the meantime here's a pic of my week 22 belly, which was taken on the last day of my hols. I think I'm having a noodle baby :-) 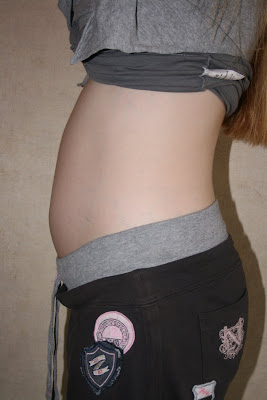 And here's a picture of my nephew, Jack, in his new t-shirt. 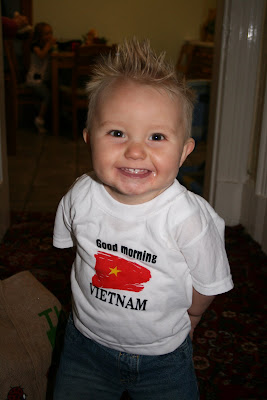 Best of luck to everyone running in next week's Great Scottish Run. And to Kas and Rob for the Moray marathon and half. I'll be thinking of you all. Well, maybe for a brief fleeting moment.