Especially when the sun is shining and there's the odd sprinkle of snow.

Sonic and I had a really lazy morning. I was only the third serving of reprobates on the Jeremy Kyle show that forced me out of bed. Where do they find these people? What I find truly amazing is the state they turn up on. Surely if you were going on national TV you might have a bath? Maybe wear something nice. Possibly some make up. But at the very least you'd stay sober and try not to swear. And if you're lying about something, don't deny it and then take a lie detector test. It really is car crash viewing. You know you shouldn't watch it, but you have a rubber neck trying to move away from it.
I managed to surgically remove my PJs by 1pm. We decided to take advantage of the nice weather and take a stroll up Conic hill. Low and behold, just as we were leaving, Sonic got a mountain rescue call out...to Conic hill. How's that for timing? I decided to go along for the trip. By the time we had arrived, the mountain rescue weren't required as the girl with the broken ankle had been airlifted. 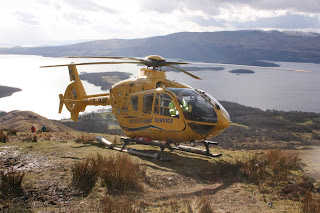 We wandered on up the hill with Joe, another MR chap. It was a bit chilly and windy, but the view were amazing. It's the first time I've ever gone up Conic Hill from Balmaha direction. And it's the first time I've ever been on the path when it's not a river.
When we got to the top, the NHS ambulance helicopter had broken down. How comforting is that? A Navy Sea King had to be called to take the girl off. The police helicopter then arrived, dropping engineers on the hill top. The engineers didn't have the specific tools, as the gears had gone, so another helicopter was sent. That's one expensive broken ankle.
Posted by Debs M-C at 18:09