I love it when a plan comes together

I'm a firm believer in everything happens for a reason. Even the rubbish stuff. I struggled to remain this positive when I pulled out after only three miles on the Great Scottish Run last year though. It was a humiliating and demoralising experience, shuffling back along Paisley Road West. Greeted within the snigger's of the on coming runners: "You're going the wrong way, hen" or from the baggy t-shirt fraternity: "don't give up". I was broken. But I knew at that point I had to get a grip. After being injured most of June and July (post-Devils) and August was wedding drama, I just didn't have anything in me and had pretty much fallen out of love with running. In hindsight (isn't hindsight a wonderful thing?!) it was probably the best thing that happened. Well, as far as running anyway. Up until then I was pretty much plodding away junk miles and half-heartedly participating in club speed sessions. When I got home that day I signed up for another half-marathon and spoke to Coach Lesley about a training plan.
Well tonight's run was one of those runs that proves everything does happen for a reason. Even the rubbish stuff. There's a seven mile round the Vale which I use a gauge my fitness and speed. Before I started the plan in September, I averaged 1:01. Never quite breaking the hour. Tonight I did 53:56. I even beat my 10K PB. Oooh I feel a PB in London coming on ;-)
Average pace 7.41. Splits 8.12, 7.45, 7.24, 7.33, 7.36, 7.37, 7.46, 7.42 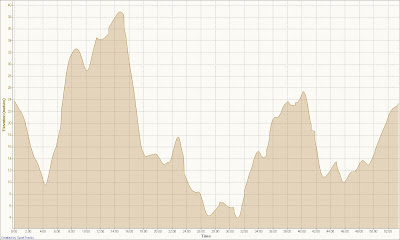 You are so getting a PB in London. Your times have been improving dramatically over the last few months.

Hey, that's a great chart you have produced there! Although I cannot read the details because they are too small to read...

But congratulations for even more PB's and good luck with the Hike in Yorkshire.