Training in the Trossachs 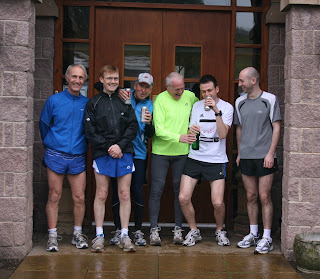 A running club training weekend conjures up images of wholesome , jolly tree-huggers prancing about in lycra, sipping aloe-vera juice and munching on gogi berries. I had many a tut and rolling eye when I told my colleagues I was off to Callander for the weekend with the troops in blue. In reality: yes, there was a fair amount of running, but there was also a lot of drinking and eating. I now look like you could squeeze a gin out my nose and I'm sure I've got a pot-belly. The only thing that has got me through the day is reading all the "Flingers" blogs and the knowledge that I going to the cinema after work. No running for me today. 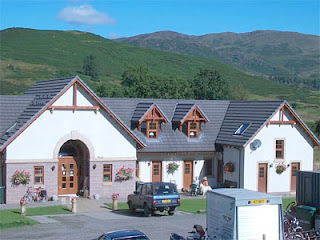 So best start at the beginning. We arrived at the Trossach's Tryst late on Friday afternoon. It was pouring with rain, so I used the I'm-cooking-dinner-excuse to bow out of a the steady-five-miler. Actually, as I've said all along - I'm trying to make every run count, so I didn't see the point in plodding about in the rain just for the sake of it. I just rustled up fajitas for 20 and drank gin 'n' tonic. Quite civilised me thinks. Then I proceeded to polish off most the bottle and demolished lots of chocolate... and someone else will need to fill in the blanks.

I woke up on Saturday, probably feeling better than I deserved too. After a "rest" day, I was full of beans (OK, gin) and really looking forward to the one minute intervals. We drove out to the cycle track and Rob took us through some drills. I nearly brought up my Special K laughing at Marco's attempts. Gawd, the things you witness when you don't have a video camera. Arms and legs were flying everywhere.

The warm-up was a struggle, but the reps were great. The session was quite straight forward. We were split into groups and sent 20 minutes out, 20 minutes back. One minute ons and offs. Simple, right? Everyone finishes back at the same point in 40 minutes, right? Wrong. We all had to go on the hunt for Marco and the dafties, who turned up five minutes later.

After a relaxing afternoon with a bit of shopping, reading papers and sipping hot ribena we headed out along the loch for some hill reps. Athole and Marco went on the hunt de hill on Friday, so I was bit nervous about their discover. The two mile warm-up, although unnecessary, was quite pleasant. Arriving at the hill/mountain, some of group cowered away before the ascent. So, Kenyan hills it was. In summary, this means going up and down at the same speed without recovery. We went up and over the hill, down the other side and up again and again and again. Five in all. As usual I started out thinking, I might just do three or four, but I'm a stubborn buggar. I'm sure the scenery was amazing, but I found myself concentrating on my shoelaces and trying not to headbutt the road. Don't tell the guys I said so, but it was a cracker of a session. Although half-way into the two mile cool down, I was so over it.

The sun had come out on Saturday afternoon, so we had a mighty BBQ feast, more drink and a ASBO award-winning few hours with Singstar. I'm sure Sonic will tell you he got the highest score of the evening. What he probably won't tell you is that he lost everytime he was up against me. 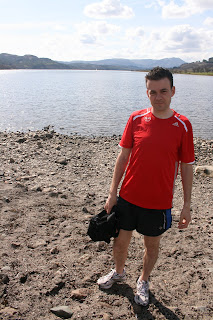 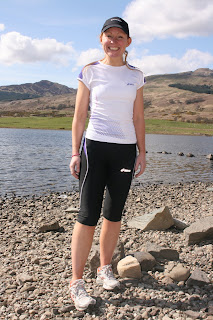 On Sunday morning, we drove over to Aberfoyle and ran the number 7 cycle track back to Callander. The weather was fabulous and the route was amazing. Still, silent, crystal blue lochs, reflecting the surrounding hills. I have to admit I struggled on this run. I would love to say I still have marathon in my legs, but I really came down to the weekend's overindulgence. I even had to stop and walk at quite a few points. But there was no rush, so I really enjoyed it. My average pace for the 12 mile route was 10.11. Yikes. I'll put that in WHWR training catergory, won't I?
Posted by Debs M-C at 16:42

Sounds like a great weekend. Did you go to the Lade Inn or to the shop next to it which sells 'nearly every beer from nearly every Scottish brewery'?

I'm off to Callander today for a week or so in my folks caravan overlooking Ben Ledi. You can probably guess where I'll be spending most of my time. Hic.