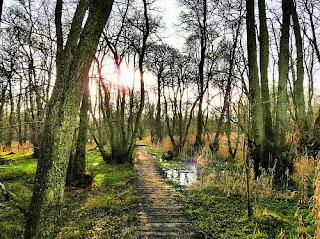 The blue monkeys were allowed an extra special treat tonight. We were let out of the Garscube Estate to run loose in the wilderness. Mugduck Park in Milngavie to be exact.

The weather almost ruined the parade, as the late afternoon brought torrential rain and thunder storms. I do love running in the rain, but I draw the line at lightening. Unfortunately the storms blew in over in time for 7pm fartlek run.

After Sunday's glorious weather, I stupidly thought summer was upon us and didn't pack a long sleeve top. So my bare arms were frozen when we set off on the trail run. I was in with the packs faster than me, so I knew I'd heat up soon by chasing them for most of the session. The weather must have put a lot of people off (or they turned up at Garscube) as the numbers were really down. Actually in my group there were four runners and three coaches. It was almost like chaperoned day-release.

I do enjoy a fartlek session. Even though I think it's a fairy of a speed workout, I like the spontaneity of it. When coach Lesley shouts run. You run. Like the clappers. But you've got no idea how long for. When she says "fast up the hill" with a glint in her eye, you know there's a killer ahead. Especially when she says "wait for meat the top". Or "sprint to the car park. You'll eventually find it".

I felt it tough to start and managed to tag on, but seemed to pick up towards the end of the five mile course. I was completely covered in mud and, therefore, delighted that it was Sonic's car I was going back to. Poor Laura "I got lost" Sands turned up in a brand-new pair of bright white trainers. She was almost in tears by the end. And we were almost in tears at her trying to dodge the puddles and muck. Maybe that's why I was ahead of her after all.
Posted by Debs M-C at 23:08