My legs are a little tired after last night's 5K. It's funny how I can run 23 miles over the WHW and be fine 'n' dandy, but gubbed after three miles.

I just went out for a steady seven-miler after work. It was amazing to run in daylight. I even managed to get home and finish my route without the fear of being hit by a car on the backroads. Double bonus. I was getting use the adrenaline pace though. 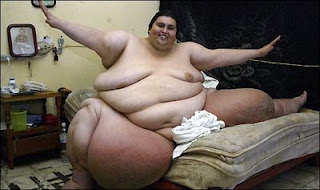 I've just watched Bodyshock: The World's Heaviest Man. Terrifying stuff. The funniest bit was he actually had physiotherapists that came to his house massage his limbs, as hadn't moved them in years.

I can't believe I felt guilty for having a packet of jelly beans and a cream egg on Sunday.
Posted by Debs M-C at 20:52

Yikes, that's not good at all - the guy in the photo.

You are getting steadily faster though in your runs missus sonic.