After a restless sleep, we were up at 6am to make the nightmare journey to the marathon start. I was at the blue start with the masses, but Marco was at the green start with the celebrities and good-for-agers. After a slightly emotional goodbye I joined the other sardines on the packed train. You could actually smell the fear and nerves in the air. It's funny how we had spent most of year training for and living for this day, only for it to be replaced with utter dread.

The chap opposite me was lecturing me on the course, pacing, hydration yada yada. I humoured him for a while before announcing that it was my sixth marathon. Three of which were in London.

The weather was just perfect for marathon running. Bright and cool, with a faint breeze. And when I started to heat up after an hour, the rain started. Perfect.

As usual, the start was a dog's dinner. Runners totally out of their depth, trying to squeeze into faster pens. The girl next to me, who was supposed to be in pen seven, was blabbing about trying to break five hours. Ahh!

At 9.45am we were off. I was so excited I could have burst. Maybe the slow start was a good thing, but it took nine minutes to do my first mile. One minute slower than target pace. I managed to make up the time loss from mile two to four, but probably expended too much energy weiving in and out.
I just love the London Marathon. It's an amazing event. Probably the only good thing about the city of gloom. Well that and the Top Shop flagship store on Oxford Street ;-) The runners, officials and support are just amazing. People cheer with such passion - like they actually know you. The costumes are hilarious. I had the unfortunate experience of passing the man in the Borat swimsuit. He was leaving nothing to the imagination - and the crowds loved it. A man dressed as a giant smoothie bottle breezed past me at mile 10, which was only slightly demoralising. I also passed the maasai warriors at mile two, which was quite exciting.
I felt great most of the way round. 8m/m pacing felt really comfortable. My endurance has really only improved only the past six months, as I couldn't help but think that 26 miles isn't that long. The miles seemed to zip past. Focusing on mile-to-mile rather than the bigger picture really helped. I only had a really low point between 21-22 miles, but then I spotted three Bellahouston vests in front and was spurred on. After passing them, I spotted Paul in the distance. Woohoo. There was a real spring in my step then. Again I had a lull between 24-25, mostly because I knew I wasn't going to break 3:30. I had to force myself to realise there was a difference between 3:31 and 3:33. Anyway I managed a sprint finish and was absolutely delighted to cross in 3:31:00. My legs weren't too happy about stopping though. I totally seized up with pain that I hadn't experienced before. I had arranged to meet Marco at my baggage truck. I could see it, but I had to stop for four breaks to reach it. After chatting to Neal and Michael (actually they talked and I looked vacant) and then finally meeting up with Marco, I slumped on the grass - shattered and battered. Thankfully after about 10 minutes my legs felt fine.
Marco finished in an amazing time off 2:48:19 in 409th position. And that, folks, is why we call him Sonic. Paul (running his first marathon) finished in 3:36:02. Being a track runner, I joked that he couldn't train for a marathon on 400m reps. Plagued with injury, he almost did. I'm sure he'll sign up for Loch Ness and give me a good run for my money. 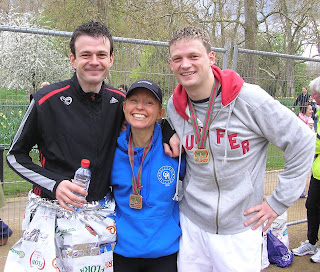 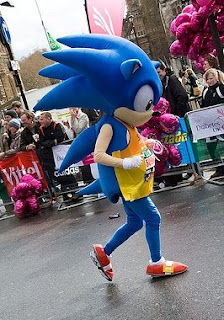 Someone stole Marco's outfit, so he had to dress as a runner. Although I had to giggle when I spoke to my Mum after the race, as my six-year-old Niece asked if "Uncle Marco was the one in a Scooby Doo outfit?" Bless. She clearly doesn't understand that Sonic won't even wear shoes that are heavier than an elastic band.

Congratulations for a phantastic PB!
We are also looking forward to read your story :-)

Congratulations Debbie. I knew you had a pb in you today. Recover well and bask in the glory.

Well done Debs! Hope your feet aren't too bashed up :)