PB by the sea

Hope everyone has enjoyed the stormy weather? When I was driving in to work on Friday, my car was rocking all over the Erksine Bridge. As traffic cones were flying past me, the most my little Aygo could manage was 10mph. When I reached the other side - a nervous wreck - the traffic boys were out to close the bridge. The wind didn't ease all day. So what did Sonic and I do over weekend? Headed to Blackpool to run the in the half marathon, which involved laps round the seafront. Even the donkeys weren't out to brace the blustery conditions.

What was once a popular seaside holiday resort is now the pits. We walked for about an hour before we could find a decent eatery. All that was on offer was fish 'n' chips, Burger King, KFC, McDonalds and an abundance of Blackpool rock. All was not lost though, as we found a fabulous authentic Italian restaurant. With real Italians. Unlike Sonic who, despite being called Marco Consani, is about as Italian as a Tunnock's Teacake.

Our hotel was a hoot. The New World hotel was owned by a gay, pony-tailed ex-cruise ship worker. Each room was decorated by a theme: the Scotsman, Venetian, Parisian...we got the Safari room. Top to bottom in animal prints. It was so tiny, you could barely swing a mouse let alone a cat. We did get a seaview though. Well, if we could have seen out of the filthy windows. After crashing out early I was woken by a drunken skinhead, who was banging at the front door. After getting no response, he started throwing coins at our window. After letting him (and his half-eaten kebab) in, I lightly dosed listening to the wind howl through the windows and praying it would calm before morning. Not to be. It was pouring when we got up. On a more positive note, the hotel breakfast was fabulous and the service was a home from home. The owners were shocked/confused that we turned down the full English and opted for cereal and toast. I did, however, eat enough marmalade pieces to give Paddington Bear a good run for his money. 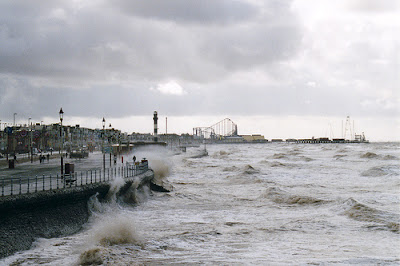 Slightly stuffed and nervous about the conditions, we headed along to Hilton for the start of the race. The route was uninspired, but as flat as a pancake. Great PB course, if the wind had been kinder. It involved a two mile lap towards the North Pier and then two 5.5 miles laps out and back towards the North Pier, followed by a short u-turn back to the finish line. All good apart from the ramps up from the lower promenade and the waves that were crashing over. I finished in 1:43:44 (according to my Garmin) which is two and half minutes off my previous best in the GSR in 2006. Sonic finished in 1:17:09. Full results and positions to follow.
Posted by Debs M-C at 20:52

Congrats on your PG Debbie, although I wish I had Marco's legs! (Not that mine don't looking fetching in my Skins).

Excellent run Debbie. Impressive time and splits. All these long runs are doing you good.

Enjoy your day off and the film tonight.