What do you do when the wind threatens to bring the windows in, the trees are bending and the clouds are shooting past like bullets? Well, if you're a half-wit like me, embark on a hilly route that takes in a seafront. Obviously. If they say tough runs are character building, then my character must be a giant.

It took me while to drum up the courage, but managed to make it out just before 10am. The saving grace was that it wasn't raining and it was relatively warm. I headed to Balloch along the loch and on to the cycle track to Helensburgh. A pimped-up car full of neds passed and one of shell-suit clan lobbed a McDonalds hot chocolate at me. Thankfully he had a terrible aim and the carton exploded in a ball of hot steam in front of me. If I wasn't so shocked I might have had the sense to get their registration plate. Can you imagine if that had hit me? I would have completely ruined my top ;-) Davie - I think hot chocolate beats Trebor mints, don't you?

It's all up hill until you hit the outskirts of Helensburgh and then it's about 1.5m (against the headwind) downhill to the seafront. When I turned the corner towards Cardross, I was practically thown off my feet. I thought the rain had started but it was the spray from the waves bashing the promenade. It was a mental and physical battle for the next five miles over to Cardross. All was not lost, as I was using the time to work on relaxing my limps and speeding up my cadence. I tend to get quite affected by external factors that are completely outwith my control. I've had many a mental tantrum when faced with challenging weather. Now I'm trying to be more positive and concentrate on running form - and block out external nasties. By staying relaxed, I felt mentally tougher, more positive and wasn't wasting energy by tensing up and fighting my way along the road.

A group of Sunday cyclists passed en route to Cardross and they weren't going much faster then me. There was a few sighs and rolling eyes exchanged. There's only one thing worse than running against a headwind, and that's cycling against a headwind. Another group of cyclists passed going in the opposite direction. I couldn't help but smirk when I thought of their return trip. 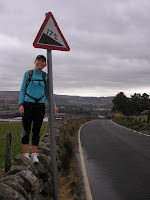 I met Marco in Cardross. The dafty had run the tour de Vale with Lindsey and then ran over to Cardross to meet me. He said that he was worried about me, but really I think he got lost. It was over and up Carmen hill. It's a stonker of a hill. One that Marco was doing for the second tim - with 18miles in his legs. He didn't moan at all. No siree. There was no mention of him being at home playing his x-box ;-) It was pretty chilly at the top of the hill. And I was distraught to discover the wind was STILL in my face. It's a super-fast finish with a super-knee buckling descent. Quick tour round Christie Park and I'd clocked 18-miles.

Finished in 2:43:44 (last time was 2:43:11) with average pace of 9:06. Looking at the mile splits, the seafront drama really slowed my pace down by approx one minute per mile. I'm looking forward to trying the route without the wind...but I don't know if that day will ever come. It seems to have been windy FOREVER.
Posted by Debs M-C at 15:41

Well done Debbie. A good tough run. I think these tough runs are soooo important as a good part of the whw race is mental and to know you stuck at it on training runs like this will give you the determination to keep going when it's hard on the race.

Trebor mints are a minty bit stronger:-)on a more serious note after reading marcos blog I would be keeping an eye on my knicker drawer if I was you.Entrants 113 and 114 Mrs and Mrs Consani. LOL