We got up early to watch the Olympic Marathon this morning. Even though we taped it, because of the time difference, I wanted to watch if before someone killed the surprise. During the 2004 Olympics, I had taped the marathon and went out for the day - with a view to watching it when I got back. Of course I received numerous texts along the lines of "at least we can finish a marathon" or "poor Paula". This time the phones were ignored until the finishing line.

It was a strange battle to view. Constantina Tomescu was the only one brave enough to go for the gold. The rest were like a pack of wolves. They all wanted it, but no one was going to stick their next out an go for it..until the last couple of miles. And then it was a close battle for the top 10 positions. Paula put in a very brave performance - just to finish in 23rd place. I'm glad the Japanese gal, Reiko Tosa, pulled out. It was torture watching her struggle. Click here for full results. 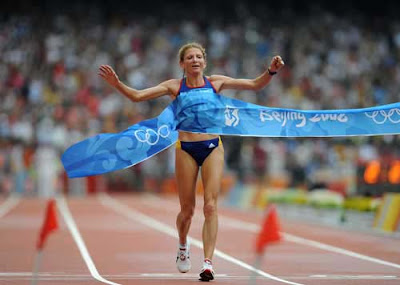 I didn't really fancy a run today. My heart wasn't in it. Instead I took my niece and nephew to a local fete for some face painting, cake eating and bouncy castle-ing.

However, I did cyle round with Sonic on his 13-mile run. I'm sure he choose the hilly option in a vain attempt to shake me off :-)
Posted by Debs M-C at 22:00

I got in late on Sat night and stayed up to watch it....still recovering from the lack of sleep but it is just so inspiring....inspiration is what I need right now!!

I stayed up late to watch it and ended up tired all day on sunday. It was an exciting race and I was really pleased Constantina Tomescu won it as she was the only one brave enough to try and make a race of it.
I did think paula put on a gutsy performance though and she did as best she could given the circumstances - an inspiration to keep on fighting even when the outcome looks like less than what you'd hoped for.