Traded in the trainers for the boots today. Even though the forecast was for rain and more rain, I was still adamant I wanted to hit the hills.

Sonic and I were joined by Athole, David (Athole's pal) and Ben. We met them at Bridge of Orchy, as we were planning on doing Beinn Achaladair (1038 metres) and Beinn a Chreachain (1081 metres). Two new Munros for me.

When we first met David, he seemed quite impressed that we had ran the WHW race. Later we discovered that we were totally humbled by his achievements. He's this year's Scottish Teacher of the Year and going up against two others for the UK Teacher of the Year. Not only that, he organises teachers lectures, school trips, climbing clubs, school plays...and he sings, plays piano, tap dances and does ballet. I felt pretty pretty deflated about my mere ability to put one foot in front of the other %-)

Thankfully the weather forecast was slightly out. It was quite dull and windy, but we never had a drop of rain. The cool conditions were a welcome relief, as on previous trips I found I overheat quite quickly. And subsequently wilt. Considering I was out with four boys, the pace was quite steady. I'm sure they would have been up there like a rat up a pipe, if it wasn't for me though. Mind you, we finished the circuit well before the 6.5/8.5 hour time allowance recommendation, so I couldn't have been that slow. 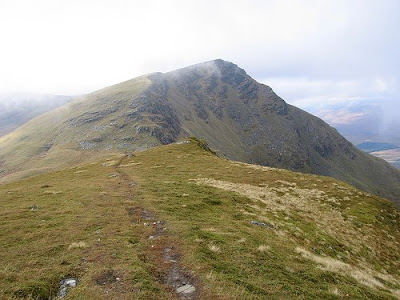 That ridge looks inviting. Sorry we missed that walk. We'll try to join you next time!
T&S

Sorry for the mess :-(
I am not lucky with those comments. For some reason I managed to submit 7 times... So I had to delete some...
T