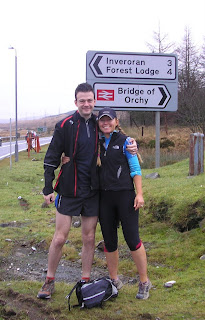 Marco and I are staying in Glencoe for New Year and suffering slightly after a night in the Clachaig Inn. After copious amounts of beer and blueberry Bacardi Breezers, I wasn't holding out my hope for today's run. Amanda and Stewart dropped us off at the Bridge of Orchy Hotel. We left our car at Kinghouse, so we could run the 12-miles of the West Highland Way section.
En route we had a debate as whether to leave the car at the ski centre or the Kingshouse Hotel. I'm a bit of a stickler for doing things properly. Although we would welcome a closer finish, I wouldn't be satisfied with not completing the full section. Whilst shaking his head at my theory, Marco parked the car up at Kinghouse, shortly after noon. On the way to Bridge of Orchy, Stewart kept asking if we wanted out sooner. Even I was slightly concerned about the distance we were moving away from the car.
After my Sis took the mandatory pre-run picture, we said our goodbyes set off up the Orchy hills. We passed quite a few groups - with bemused looks - on the way up. Despite feeling quite delicate, I felt really light on the hills. Usually I struggle on this incline, but not today. Maybe it was the blueberry juice sugar injection. We were moving quite quickly on the descent into Inveronan. The road section between Inveronan (past the annoying yappy dog that always seems to appear) and the Drove Road, is my least favourite part of the WHW. Running on road in trail shoes is awful. 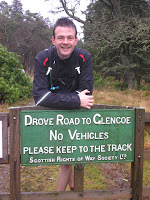 Up the Drover Road on to Rannoch Moor, is always a bit a challenge. It's deceptively steep incline can take a lot out of your legs.

The weather was still and fresh, so Rannoch Moor was very enjoyable. I love the wide open space and seeing the length of the trail stretched out in front.

After about six miles, Marco decided he was "starving". Don't be deceived by is super svelte physique, the boy has an bigger appetite than a gastric band waiting list. Despite a super-fuelled breakfast and six scoops of energy drink in his platypus, he felt the need to devour a Cinnamon and raisin bagel. He unsuccessfully disguised his greediness as "training to eat on the run". Watching him choke and splutter on the third bite was quite comical. Devoid of intelligence it was me who had to tell him to stop running until he cleared is air pipes. I fear the worse for letting him out there on his own.

I ran the whole way up the hills to the highest point, which is something I've never been able to do and the last three attempts. I didn't really feel any different that running on the flat, other than the pace was slower.

We really picked up the pace on the trail down to the ski centre. I loved running down hill. I think the no-fear element is one of my strengths. Unfortunately my feet move faster than my brain, so it's quite treacherous.

The route from Bridge of Orchy to the ski centre took us 2:15. This is the point-to-point time including stopping for pictures, comfort stops and clothing changes. Even though it's January the temperature was eight degrees, so there was a few pip-stops for removing layers.
We picked up the pace again on the way to Kingshouse. For reasons which escape me, I was running faster that 10K pace. Oh well, a fast finish is great race preparation.
Finished the 12-mile section in 2:25. My garmin says I burned approx 1000 calories, which I promtly replaced with a Clachaig burger and chips.
Great band on in the Clachaig...

Sounds like you had a good run. Well done and hopefully see you Saturday. John