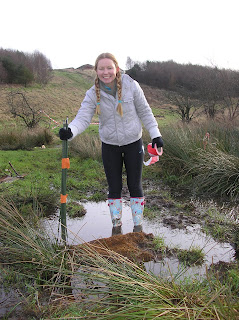 Completed my first real cross-country today. I know I did the west-districts back in September, but that was a kid-on one. More like a trail run. My shiny yellow spikes didn't even have a mark on them. Today, on the other hand, was the real McCoy. The 6.7 miles of the Garscube Henderson Cup was a hilly swamp.

I made it quite clear that I was just taking it easy. Just a normal training run to take in some hills. My main focus for the weekend is my long run tomorrow.
After helping to set out the course, I found it hard to believe that people actually take cross-country seriously. Really? I just think it's a joke. The comedy value was heightened when I stood knee deep it mud. The picture will give you the general idea of what it was like.

It was a handicapped race. I started first and managed to finish last. But hey ho, I was first lady. As you might have gathered by the previous statement, I was the ONLY lady. That's a nice 11 points on the club's winter league with an absolute minimum of effort. 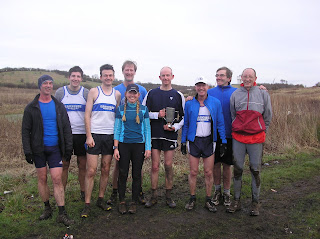 (Yes, those shoes WERE bright yellow!)

Picture of the runners at the end. Guests included Mike Thomson (fellow virgin WHW-er) and some random bloke who turned up saying he was originally from Glasgow, lived in Belgium and spoke with an American accent. I don't know what was funnier, the silver tights, the bobble hat or the odd gloves. n
Posted by Debs M-C at 16:27