Four seasons in one day

You know you're in Scotland when you can go from grey skies with torrential rain, to glorious sunshine, sleet showers and, of course, the mandatory gale forces winds...all within one run.

I had one of those runs that could you put you off for life. My legs were stiff - blaming squats in the gym on Friday - and I generally felt pretty rubbish. I was just putting in the 16-miles for the sake of doing a long run. I suppose I was training my body to run when I just didn't have it it me. So all's not lost.

I started on my usual 16-miler over the Balloch Horseshoe. I messed up my Garmin at mile five and didn't realise until a couple of miles up the road. It's amazing how gadgets have the ability to de-motivate you. After I discovered my mistake with the overall time and pacing, I couldn't help but think what's the point. In hindsight it was quite nice to run without a time-to-beat in mind.

It was pretty windy from there on in. I can't remember a time when I did that route and it wasn't windy. 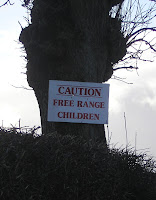 I stopped to take a picture of my favourite sign, which is posted to a tree outside a family-run farm. Not only does it mark the end of the hills, but it always make me smile. I can't believe I'm carrying a camera on my runs now. I'm blaming you JK ;-)

I'll spare you my moans, but I was pretty miserable for the rest of the course. And when the cold sleet started, I couldn't wait for it to be over. When I finally made it home I was soaking wet, my skin was bright red and my lips were blue. My hair was a mass of knots, which took a half a bottle of conditioner to untangle.
When Marco made it home, I was strangely comforted by the state he was in. I just presumed it was me that had a terrible time. When he opened the door he collapsed face down, foaming about never racing and then doing a long run again. As the loving and devoted wife that I am, I took some photos and a video and then shouted out him to get his mucky gear off the carpet. Hey if I was that mean, I'd post the evidence ;-)

I should have listened to the bible. Never do a long run the day after racing! Glad I made you feel better tho babes. :-)