After the success of yesterday's race, Marco and I went to a pal's house for dinner. Lack of communication on who was drinking and who was driving meant that we'd both had a few glasses of grape juice and had to kip over. We must officially be the worst house guests. After drinking Dominic's wine, eating all his food, wilting by 10.30 and stealing his bed, we then woke-up the house well before dawn. And left the carnage of the party behind. Marco got a mountain rescue call-out, so we were up and out by 7.30.
As he went off to rescue mountains, I went back to bed with a massive bowl of Frosties and the News of the World. After enjoying what is deemed as a normal Sunday morning, I felt a bit guilty and got ready for my run. I didn't have a whole lot in me, but I didn't want to miss a long run. Using the I-can't-be-bothered excuse is not a valid reason for missing a run. 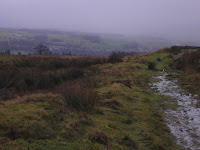 As if I hadn't had enough of "cross-country" I decided to hit the trails of the Stoneymollan route. It had been pretty stormy through the night, so I was expecting some dodgy terrain.

As I set out, I could feel the 10K in my legs. Or maybe it was my Brooks trail shoes. I had never run in the them before and I wished I'd kept it that way. They were terrible on the roads. No cushioning, so I could feel every strike going up my legs. Much better when I hit the trails and starting heading up the hill. The trail was indeed wate 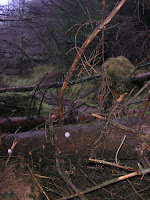 rlogged and submerging my feet in icy

On through the woods, the storms from Tuesday night had uprooted quite a few trees. I stopped to take a few pictures before passing the gates towards the farms. There was a lot of pesky coos on the trail, but I'm getting a little braver. I'm sure they were laughing at me as I dragged myself through knee-high deep muck and sh*te. I even lost my shoe at one point, as it was sucked off in the muck. There was a brief moment of panic, as my house key was attached to the lace. Sometimes I liken my runs to Mr Bean's adventures.

It was back on the country roads down to Cardross. Running through the town looking like I had just emerged from a swamp, raised a few eyebrows. Or maybe it was my erratic running style, as the non-cushioned trail shoes were causing my shins and knees to throb.

I was pleasantly relieved to be back on the trail. Heading up another farm, I noticed Marco running towards me in the distance. Stupidly I decided the whistle, which attracted the attention of the farm dogs - who were not amused by my presence.

I ran the rest of the route with Marco. Usual really. Him sauntering and me running flat-out to keep up.

Finished the 12-mile route in 2hrs. Average pace was 10miles. Given the terrain and gradient, I was pretty pleasured with that. And it was two minutes faster than my last attempt. To be fair I was little more wary of the killers cows way back then.

NB: I later discovered Marco's early morning wake-up call was to rescue two deerstalkers lost in the Campsies. If I'd known that, I wouldn't have been so willing to get up. Their fear and pain was just karma.