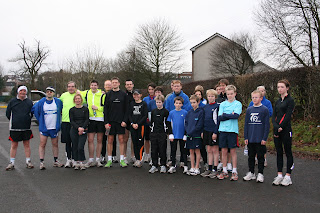 OK, Hogmanay it's not until tomorrow, but it's Sunday today so the organises tried to cash in on bigger turn out. It's my first attempt at the Jack Shirley Memorial Race. Usually I'm on a boozy European city break for the celebrations, but this year Marco and I are heading to Glencoe.

(picture: All runners. Although I look like a junior, I ran with the grown-ups)

The 4.2mile (undulating) race is open to all - seniors and juniors. It's a handicap, so the start times are (loosely) based on runners' 10K times. Big Charlie was first to go and I was 17 minutes behind him. I had the start time as Willie. I've seen in club get-up at races, but never seen him at training. At the horn I realised that with all the gibbering I had forgotten to do a warm up. The temperature was verging on chilly and I had yesterday's 16-miler in my legs. Oops. I was a bit rusty at first. Willie tried to stick with me - right next to me, actually - along the road past the Rangers training ground. It's a narrow path, so I was forced to run on the road.
Turning left over the hills of Langbank, I lost Willie on the first major incline. I could only hear his footsteps for about half a mile. Result. There was no way a grown man with a ponytail longer than mine was going to beat me.
There are some stonkin' inclines on this course, but it's one of my favourites. Nice rolling hills with some fabulous views.
About three mile in, I could hear some steps behind me. I was slightly worried about who was catching me up, then a hobbit-sized junior appeared at my side. I was breathing out my ears and he was smiling and enjoying the view. I don't whether he stuck with me because he wasn't sure of the route or he was thinking of seasonal charity work and helping the aged. Thankfully he shot off after a few hundred metres.
I passed Charlie - the loveliest man in the world - on the last hill into Milngavie. It was all down hill from there. Marco passed me in the last 500m (tsss) to take the fastest time.
I finished in 32.52. Average pace was 8.07. Slower than half-marathon pace, but I didn't take it too seriously. It's a festive soiree after all. This morning I was planning on going along to be official photography. I changed my mind when I realised I didn't have time to get showered and changed. Just enough time to jump in to my running gear. At the end the day, I'm pretty happy with my performance. My training schedule for this weekend was hills on Saturday and 16-miles on Sunday. I just reversed it, but don't tell Lesley.
The jury's out, but it looks like Marco may have broke the race record. The organisers are checking past results for the verdict. Actually, Marco's been on the net for the last hour trying to find out for them. I had to talk him out of emailing the previous record holder (sorry Stephen) on the grounds of bad taste.
Posted by Debs M-C at 15:41

Don't ask me! One year I ran 24 something and asked if that was the course record, but Jonathan Austin said I'd run faster than that before. Most likely in 2002, but I can't find any results either. I thought it had been beaten since then by Greg or Lindsay or somebody, though.

Funny how you can break the course record and still not win the handicap, isn't it?

So it would appear from the Garscube forum - see, I used to be fast! I think it was the 5-mile championship record for the old Kessington course that Greg shaved a few seconds off.