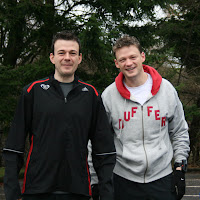 Or not so clever as the case may be. After a whole day of over-indulgence, I felt more stuffed than the turkey. The only solution was to meet up with my fellow Garscubians for a 12-mile trail run. I probably had enough calories in me to fuel me on the full West Highland Way, but we opted for a small section starting at Kirkhouse Inn in Strathblane.

(picture The Consani Brothers)
A small group of 10 met at noon in the car park. There's usually more of a turn-out, but I guess the weather forcast and/or the previous nights' drinking was an incentive to watch repeats on TV. We met at the more civilised hour of noon - to allow for drivers to sober-up below the legal limit.

Captain Athole shouted "Everyone know the route? Yeap. Yeap. Good" before heading off and leaving a few startled faces behind. Thankfully I was more than familiar with this killer course.

The first few miles - out of the village and on to the trail - were up hill. I always find hills on cold muscles really tough, so I slipped to the back. By the time we got to the Carbeth Huts I had caught up and overtaken. The Way was much more pleasant and less scary than Saturday's skating. Unfortunately the mud patches were back to ruin our trainers and splatter our clothes.

We stopped at Beech Trees to regroup. Wee Ann had taken a fall in the mud, so turned up looking like a farmer's wife.

Setting off as one group, we past another WHW runner in training. I was frantically whispering and pointing to Marco when he past. I recognised him from the race profiles on the race site. After a search when we got home, I discovered it was George Reid. I knew I recocognised the Fetch shirt and the buff.

We turned off the Way (I've had enough for one month) and headed up the stouter of the hill to Killearn. Call me an sensationalist, but I'm sure it's a mile long. Usually I have piercing pains in the thighs and calves at the top, but I felt fine 'n' dandy - albeit slightly pink. Despite being Boxing Day, the temperature was strangely warm. We thought we had managed to escape the predicted stormy weather, until we headed past the farm and back on the trail. The strong head wind was pretty fierce. Thankfully the trail follows through woodlands, so we were sheltered for the remaining five miles home. There was lots of cheery families out, so it was lovely to see some smiling faces.

Finish the 12.01 route - without stopping my watch for breaks and gates - in 1:54:46 Average pace was 9.33, which is not too bad currently the terrain. The last time I did this route it was June. Although I had a hip problem and I spent most of the time gossiping, I took me well over two hours.
Posted by Debs M-C at 00:09