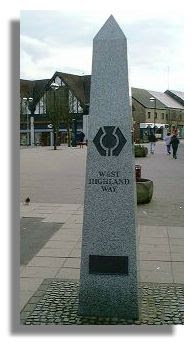 WHW group run: part deux. We met at Milngavie station at 9am. As usual Marco and I were late, so we missed the group photo. Chatted with some familiar faces and folks from last run. With the wonders of the internet, I feel as if I know everyone already. Finally met the great John Kynaston. JK is to jogging and blogging as JK Rowling is to child wizards. I'm sure he's filed his report before he's even unlaced his trainers.

Today's it's Milngavie to Drymen...and back again. Quite familiar with this section route, so I knew I could get away with using my road shoes. Or so I thought. I would have been better off with a pair of crampons. The temperatures were below freezing during the night, so when the rain started in the morning, it had turned to ice.

Out of the town and through Mugdock the grit trail was OK, but it was like dancing on ice from there on in. I was running on my own for most of the first section. Not because I lack social skills, but because the fast group were too fast and the slower group were, well, too slow. I think Marco felt bad about my no-friends situation, so hung back to run with me. Actually he ran off and then stopped to let me catch up. I found it really hard to run on the ice. It was like running on a treadmill. My legs were doing to revolutions, but I wasn't actually going anywhere. Now I know what a hamster on a wheel is like ;-) The slow pace meant that I couldn't heat up. I've got really bad circulation, so my hands and feet were like blocks of ice.

I sent Marco packing before Drymen. I was planning on getting there and turning straight back. The thought of sitting about in wet clothes in the freezing cold was less than appealing. By this point I was so blue, I looked like a smurf. John Kennedy (winner of this year's Devil o the Highlands race) passed and warned me about the bridge at Drymen, as the ice had made it quite treacherous. He also commented that he'd seen my My Race feature on the Devil's race. Oooh I felt like a minor celebrity. When I got to the bridge - as I'm slightly accident prone - I decided to make that my turning point.

The road from Drymen back on to the trail was my lowest point. The roads were a nightmare. I passed another three WHW runners on their way to Drymen. Looked like some of the group dropped off en route, as there was definitely more that set out. I could have easily thrown in the towel, but I had motivated myself with an incentive: to burn enough energy to enjoy guilt-free pizza and chips that night. Yes, I'm that shallow.

After the most boring part of the WHW, I was relieved to reach the steps back on to the trail. I met an elderly rambling group at the Way marker. I warned then about the ice on steps and the extremely slippy duckboards. As I ran off, I heard the distant sound of shrieks and whooping.

Heading towards the Killearn turn off the sun was trying to come up. Thankfully I was thawing out and feeling less murderous. The fast (er) boys past me shortly before Dumgoyach. Ian Beattie told me that he was: "keeping Marco at the back to slow him down". That made me giggle, as Marco is usually like a Labrador that's just been let out of a car.

My encounter with them was short-lived. I was on my own until after the Carbeth Huts, when I ran with Tim for a while. We parted when I had to stop for a comfort break. The fourth of the day. That's frosty weather for you.

On through Mugdock Park, there was a few hairy moments with unleashed dogs. Back on through Milngavie town centre and it was all over. 24 miles bang on. It's amazing how you can programme you brain to tell you body what you need. If you're out to do a 24 mile run, it's mind over matter. Tell yourself you're only doing five miles and your body will give you the energy for five miles, but not a step further. Don't know how my legs will react when I have to tell them 96 miles is on the cards.

Hi Debbie, John wasn't exaggerating about that bridge! You can see what it did to me on http://whw08.blogspot.com/.

It was nice running with you (although all too brief). No doubt our paths will cross again.

Ah ... you say the nicest things! Look forward to meeting up again soon.