My first dabble with the WHW

The first time I experienced the West Highland Way, was on a six day walk in June 2006. I didn't find the walking particularly draining. Not physically anyway. But the hangovers nearly killed me. Yes, after each day's walking all six of us hit the pub.

Coincidentally the day we arrived in Kinlochleven, was the day of the West Highland Way Race. As we basked in the sun, whilst sipping my beer I couldn't get my head round why anyone would want to run the route. Let alone run the route in one go.

When we arrived in Fort William on the Sunday, we went straight to the pub. Some random dive in the middle of the main street. We ended up talking to a few of the chaps who had run and supported the day before. I vaguely remember that they were southerners and one of them DNF-ed. I often wonder if our paths have crossed again this year. Does anyone remember talking this picture for us? 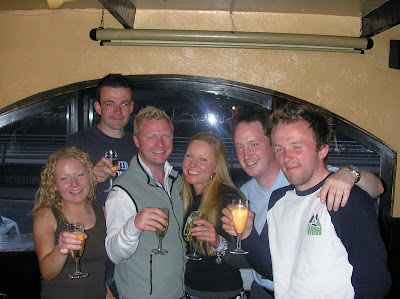