Saturday was Garscube Harriers' annual West Highland Way relay race. Four teams set out from Milngavie at 7am. The route was split into 12 bitesize (or big cry baby) sections. It's not a real relay as such. People don't wait until their handover team member arrives - otherwise we would have been there all day. Each section starts off a various times throughout the day. With the last leaving Lundarva at 3.45pm. The winning team was the team with the lowest cumulative time across all team members. 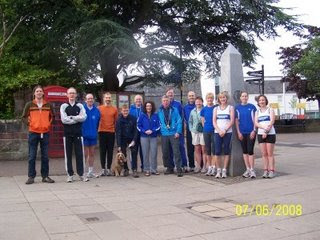 Sections are mostly allocated at random, but members could request their preferred option. I had asked for the Lochside, as I've only walked it once and ran it once. My knowledge was fairly limited, so I just wanted to familiarise myself for the final time.

I started at Rowardennan at 9.45am. I was adamant that I was sticking to race pace all the way along. OK, maybe a little faster, but I was mostly concentrating on not raising my heart rate and just keeping my breathing relaxed. So the other three runners went tearing off and I sauntered on behind. I know it wasn't the best team spirit, but there was no way I could risk hurting my foot more or wearing myself out.

I had a bit of an epic first mile. After the drama of my foot bone pain over the last few weeks, I'm starting to think there are lots of signs that I shouldn't be doing the race. Firstly my Garmin (which I had to replace in January) decided to give up the ghost. Then I broke the strap on my favourite hydration pack. So I had to spend the next 13 miles with a pack rattling round my neck and shoulders. I don't even get me started on the midges :-(

All was not lost though. It was a glorious day. I know this section is dreaded by many walkers and runners, but the lochside is a totally different place in the sunshine. Both my previous journeys were through torrential ran. It was so still and quiet, so I never got to scare any walkers. Huff!

I finished (very comfortably) in 3:12. I really took it easy, so I was quite pleased as I'll be aiming for 3.40 on the big day. More importantly, there was loads left in me and I really enjoyed the section. I actually think (or hope!) I'll enjoy it on the day. It really takes the pressure off and you don't have to worry about time or pace. I just jogged along thinking: Oh look there's a hill, best walk. Oh and no point running across boulders. I even stopped the chat to a few folks. And offered to take tourists' pictures. Mmm I wonder how many people in my team read this blog. Yikes. Off to check....Sh*te I've just noticed that Alex and Ben were on my team. Alex - don't forget to sponsor us. Yes, I was tipsy but not that tipsy. And Ben you're going to be annoyed later in the this posting anyway...

After I finished my leg, I went on the pick up Sonic who was running from Beinglas to Tyndrum. And guess what? He was gubbed after racing Alex and Euan. Some boys will never learn. So then I had to listen to him whining about losing speed and not being able to run 12 miles. Despite telling him frequently that he was never going to cover the section in 1:40 during the race...it went in one ear and ended up in Australia. 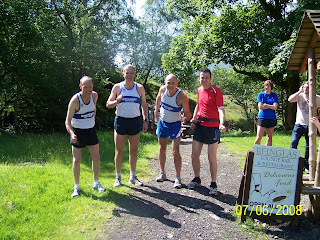 We followed the route along to support the folks running the latter stages. As we cheered and clapped we were greeted with various comments (some quite colourful) about our quest to run the full thing. I suppose at least people appreciate it.

After the day was over, the majority of the troops stayed over at the Inchree Centre in Onich. There was lots of fine food and beers consumed. Big thanks to everyone who organised a fantastic day out.

The aforementioned Ben is Garscube's latest (and fastest) American recruit. He entertained us with his impression of the local neds mocking his yellow shorts. After a few beers, this was THE funniest thing I've ever heard.


Anyone see the similarity between Ben and Groundskeeper Willie from The Simpsons? Sorry, Ben, but that could stick. That's one in the bank for the Garscube lookalike award at the Christmas party. 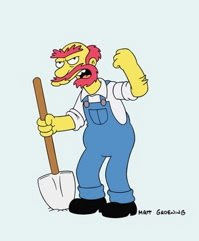 After a restless night in the sauna that is the Inchree Centre, I woke up at 7am. Not wanting to disturb the gals in the dorm I decided to go out and read some papers. That was short lived. The midges were out in full force. I sat in the car waiting for a suitable time to chap up Marco and the guys. Just after 8am Marco found me at the door of the boys' dorm scratching, break-dancing and shrieking: "please get me out of this midge infested hell-hole". And that concludes another romantic break in the Scottish Highlands.

And the Marco-ism (s) of the trip 1) Asking the organisers whether the relay finished at the End of Way sign or at the sports centre? As if. 2) When driving from the finish to the Inchree Centre, Marco decided he wanted to drink one of the beers we had packed. Despite the fact I was driving he asked me all in seriousness if I "wanted to share one with him"

Tim did you read that?

First complaining about a sore foot and then picking the worst section of the race for a club relay? LESS THAN TWO WEEKS BEFORE THE RACE!?!?
You are really after a drama queen award aren't you?

I take your Midtarsal is a fine then(?). I hope so.

Hi Thomas, I don't think the loch side bit it the worst for feet. I reckon running down the hill into Kinlochleven three times in one month probably had something to do with it!

Anyhow, Debbie, delighted to hear that you had a good run. After the scare you're had, it'll hopefully have restored some confidence. You don't mention how you foot was so I'm hoping that means you didn't have a problem with it on the run.

Yes, you are either mad or completely healed up. Hopefully the later or both at once!

Debbie,
Looks like I might be taking part in the WHW, albeit at a late stage as support runner for Jim Robertson whose friend has had to drop out through work commitments. He thinks I will not be running until late Saturday night from Kingshouse to FW, so as I will be at a loose end for the majority of the day I would like to set up my massage table at a point where it will be needed but not interfering with those who are providing massage officially. Do you think this will be practical or indeed encouraged? Where would I find out where to get permission? I will also be carrying my camera so look out for some more snot shots!

I think that you would need to email Dario (the race co-ordinator)if you wanted to do that. He is contactable on the West Highland Way race website.

Marriage is: not having to answer your own questions ;-)

Pictures would be great. I'm writing the report for My Race, so I'll be looking for lots of pictures.

I was running with Jim and his crew for a wee while last night.