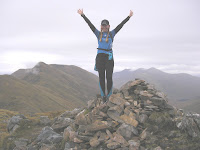 OK, next on the agenda was a hill run. So, any normal person would have gone up the Whangie. Possibly the Cobbler. Or Ben Lomond at a push. Oh no, not Marco and I. We opt for 24 miles across the seven munros of the South Glen Shiel Ridge...in one day!

I've been a keen Munro bagger, since my debut in May 2005. In over two years, I've notched up over 80. I could safely say, that my two great loves are now hillwalking and running. So, why have I never combined them both?

To set the scene: We drove up to Glen Shiel last night and camped near Cluanie Inn. It was four degrees, so it was a quick dinner and into the sleeping bags. Awaiting on a crisp and misty morning, we realised that the car battery was dead. Calling the AA we had to hang about freezing until 9am until the car was mobile again. So we didn't start until 10am - three hours later than planned.

The epic route started with a gentle jog for six miles along to the start. Most walkers take two cars to save this journey. It was most walking/stomping on the way up. But we were moving faster, due to footwear and light load. Up to the first cairn we ran down and over to Munro number two and then on to number three. Slight navigational error and we were on our way to number four. I started to slow and wilt with the exhausting gradient. Marco hit the nail on the head when he said: "It's like hillwalking, but with less clothes, less food and less grip". Trail shoes aren't really the best for rocky hills. And we packed extra light with just some biscuits and oatcakes for fuel. A few hours in and it was a game of peaks and troughs. And by Munro five it was mostly troughs and troughs. We were out there, practically naked, exposed to the elements. When the cold rain started, my mojo hitched a lift on the wind. Even the power of the oatcake (I should be an ambassador of oats) coudn't save the day. After the last Munro I had enough energy to run all the way off the hill and then down the four mile military road back to the car.

So, back to my original question. Why haven't I combined running with hillwalking? Because they don't bloody well belong together that's way. They are both glorious pastimes that deserve there own special attention. I missed my sack full of protective gear, nice lunches and comfy waterproof boots. So, will I do it again? Damn tooting. Seven Munros in nine hours is nae a bad day oot.