A bit of bagging 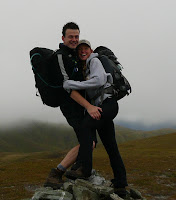 Five munros in eight hours across Ben Lawers. Sounds horrendous. At least it did when I was studying good ol' Camron McNeish's book. In reality though, it was the easiest five munros I've ticked off.

There was a wee gang of us who met a Killin on this fresh Sunday morning. The forecast was for sunshine, but in true Scottish form it was more on the grey side.

The first munro was the toughest. Steep, grassy slope...my favourite ;-). But once we were up, there was a fabulous path across the other four. The windy was crazy. Most walkers turned back, but we decided to brave it. Or maybe I decided for everyone. Not only were the steep inclines a challenge, but trying to keep my feet on the ground was an extra strain. There was numerous points where I was completely knocked over.

It would have been a great route to run, if it wasn't so windy. I'm feeling quite inspired to try running another ridge next weekend. And include that as my long run. So it's back to Cameron for some ideas...
Posted by Debs M-C at 23:02