Slow coach to Balmaha and back

I opted for the ye olde fashioned way and went for a WALK on the West Highland Way. 'Twas a glorious bank holiday Monday, so the perfect excuse to pack light and take in a leisurely stroll in the Scottish countryside.

I parked my car in Drymen and headed over to Balmaha. I knew walking was going to be challenging enough - it's amazing how slow and monotonous it is now. But the out and back nearly sent me over. I really enjoyed the route to Balmaha, but I was over it by the time I had come up and over Conic Hill for the second time.

My quads hurt a little on the steep steps down from Conic Hill, but other than that I wasn't really suffering from Saturday's run. I was tempted to pack my trekking poles for situations like this, but I knew Sonic would be horrified. I think he's still recovering from seeing me running on Saturday with a donut water bottle. But that's nothing. Wait until his family disown him when his picture appears in Rangers News! Lomond Mountain Rescue were helping walkers from the Rangers Charity Foundations (apparently it's a real charity) up Ben Lomond yesterday. The crew were all posing with the Scottish Cup ill-informed that the photographer was from Rangers News. My brother's going to frame it, as he thinks there's hope for him yet. Davie - think you need to have a word. 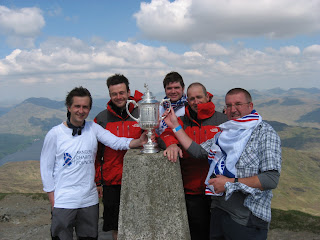 A little note of big congratulations. Caroline for a stonkin' PB in Edinburgh Marathon. Caroline was gunning for sub 4:10, but nailed 3:54! John K was aiming for sub 1:27 in the Kirkcudbright Half Marathon and finished in 1:25. Ian B was looking for new t-shirts, so ran the Stornoway Marathon AND the Edinburgh Marathon the day after.
Posted by Debs M-C at 20:38

Shame on you Marco , I dont know if things can ever be the same between us now :-)if it's any consolation you're too good looking to be a hun

eeek. you must be blind Davie. In that piccy I have my eyes shut and my hair is everywhere. But thanks anyway. :-)

Thanks Debs! Have a good run tomorrow night, I was really tempted to join you all but I think that is going a bit far after Sunday!