Mary takes the turkey...with a little help from Joseph

Sunday was the club's annual Christmas Handicap race. The idea is that everyone dresses-up as Santa and embarks on a 3.25 mile race round Bearsden. Last year I decided to buck the trend and go as an elf. 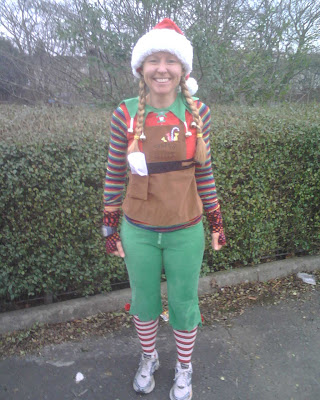 This year, I'd need more than magic dust to get into the elf suit, so Sonic and I decided to go as Mary and Joseph. Mind you, I don't think a pregnant elf is a good look. 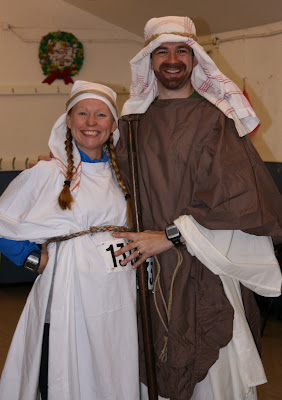 New club handicapper, Paul (Brother of Sonic) was in charge of allocating the times. The idea is that everyone sets off a different times and should (theoretically) finish around the same time. So faster runners should catch slower runners towards the end. Given that I'm eight and a half months pregnant and haven't run for over three weeks, Sonic and I were set off first. 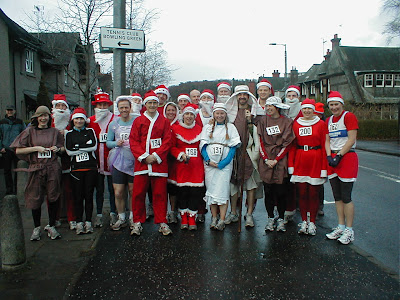 It wasn't the easiest three miles I've ever run. There were lots of steep inclines. The uphills had me gasping for breath and the downhills bashed my bladder. It was quite comical running along the switchback with the cars beeping at us. Papa Sonic even came out to video the occasion. I hope the passers-by were impressed with my bump prop. I bet they didn't think it was a real bump though.

During the last half mile, the first Santa appeared behind me. I was in danger of being piped at the post. Evil Santa was being boo-d by the supporting crowd as he closed the gap in the last 50 metres. Thankfully Joseph managed to fend him off with his crook...and we all crossed the finishing line together. But the bump was first over, so won the prize...of a giant frozen turkey %-) Mary and Joseph also won the prize as the best dressed, so it was a good day all round.

Paul did a fabulous job as handicapper, as everyone else finished within minutes of us. He'll know next time to mess it up and not get landed with the job.
Posted by Debs M-C at 11:34

with that profile i might have had an 11:28 pace NOT pregnant! good job! isn't it really kind of fun just to run a race for fun and have no stress???

You were a fab Mary and Joseph...I tried to catch you but you were just too darn fast! Bet those wise men wouldna ha stood a chance!

Have a great Christmas,

Great photo of Mary & Joseph though I'm not sure they would have had matching Garmins!!!

Are we going to see the video?

Ok.... Debs runs the Milburn 10mile handicap 6 months pregnant...... and the rest of us don't see her after the start.
Mary Debs runs Garscubes Christmas handicap and wins the turkey......
I see a pattern emerging here!
Must ask SAL for guidance for handicappers to include pregnant runners, after all it's not as if they are ill.

Props to you - you did awesome and look ADORABLE!!! Perhaps being a nun might have been even more fun! Your pace is excellent, have you realized you are 8+ months pregnant?!!! It is amazing you are still running!

It provides comprehensive knowledge of the subject. Everything written in this blog is close to satisfactory level. I am sure no one can raise any issue about all the information delivered here.zwangerschapsyoga amsterdam zuid