I'm finding it quite comical that everyone wants to guess the gender of the baby. Even strangers like to get their bit in. The funny ones are the adamant ones. You know, the "I-never-get-it-wrong" pensioners. My 83-year-old gran is one of them. Except she changes her prediction everytime I see her.

Old wives tales are fun, but that's it. There really is no truth in them...or is there? Here are a few of the classics:

Girls are carried high and boys are low. I certainly have a very high bump. So high in fact, that I don't need to wear maternity trousers. I've got two pairs that I can't wear, without holding them up. I'm still wearing the regular jeans I bought in August. I did have to go up a size to accommodate my growing hips though. Really the way women carry is the way you carry is determined by muscle and uterine tone and the position of your baby.

Carrying extra weight on the hips, means it's a girl. And all front, it's a boy. Sh*t I think I'm doing both.

The shape of the belly is also used. Watermelon for a girl and basketball for a boy. I look like I've swallowed a football, so I'd have to go with the latter.

If the hair on your legs is growing faster, then it's a boy. Really? I haven't noticed any change in hair growth.

If the Dad-to-be is gaining weight too, then it's a boy. Sonic, care to clarify? Bearing in mind that Sonic can demolish huge amounts and still look like a manorexic.

It's a girl if the the maternal grandmother doesn't have grey hair. Does this mean my Mum or Sonic's Mum? I'm not sure either will know what their natural hair colour is. Although I'm sure they'll both protest that they're natural blondes.

You're having a boy, if your feet are colder during pregnancy. Who thought this one up? My feet are always cold, so who knows.

If you're craving salt and meats, then it's a boy. Sweet things, it's a girl. I've never been much of meat eater. Actually I was a vegetarian for 14 years. I usually go for chicken and fish, but I've gone off that completely. Or at least I've gone off cooking it. And has there ever been a pregnant woman who hasn't hit the chocolate?

If you look better during pregnancy, it's boy. And it's a girl if you look a bit rough. Apparently the theory behind this is a baby girl steals her Mother's looks.

There are also lots of random theories...You crave orange juice for girls, like the heel of a loaf for boys, your nose spreads with a boy and your pee is dull yellow if it's a girl. Also if your asked to show your hands...if you show palm up it's a girl and palms down it's a boy. But my favourite is how you hold a mug. By the cup it's a girl and by the handle it's a boy. All very bizarre. You've got to love those old wives for their tales.

There's also quite a traditional test involving a piece of string and a wedding ring. If you dangle the wedding ring over the bump, it circles for a boy and goes side to side if it's a girl. I've still yet to do this one.

There's also the Chinese gender prediction chart: Legend states that the Chinese Gender Chart was buried in a royal tomb near Beijing over 700 years ago. The original is allegedly currently in the Institute of Science in Beijing.
Rumour has it that this chart is over 90% accurate. Basically, it's based on the age of a the Mother and the month of conception. I'm 33 and Baby C was conceived in late April or possibly very early month. 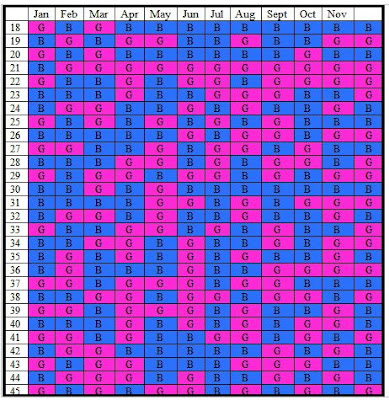 So there you go, folks. Make of it as you will. If you would like to have a guess, I'm willing to run a wee contest.

Just leave me your guesses for

sex
weight (please be kind!)
Date of birth. The present EDD is January 19

Never one to listen to old wifies here are my predictions to start everyone off.

Sex: Girl (all the best people have daughters and lots of them!)
Weight: 7lbs 2oz
Date: Sun 25 Jan 09 (during our whw training run!)

Just checked out your chinese chart and it correctly predicted girls for Katrina for all four!! (well 3 as Jo & Emma are twins).

Let's go with Thursday. With both parents ultra runners the it is appropriate that Thursday's child has far to go. so that will be either 16th or 23rd. Given that it's gonnae be as stubborn as mummy, we'll make it late, so:
a Girl on the 23rd and given Mum's choccy habit 8lb 2 oz

And Deb's next column will be on the theme - 'Doesn't it just get right up your nose how people, when you meet them, say "Have you not had it yet?" even though the answer is right out there in front!'

Well the chart was out for all three of mine.. so I am basing this on my female instinct;-)

Wow! A few interesting theories there! I'm going for

the tales were hit or miss for me too...of course, i found out early it was a girl! my guess:

Jan 26th (It's Australia Day so always a good day to be born)
Sex (Am not reading the tea leaves well but reckon it will definitely be one of the 2 ) - Girl
Weight - you are both so lean and mean - 9lb 3 ox - sorry)
Other: Full head of hair and big toenails - later on in life she will miss them !
Cheers - Corn Beef

I'll get guesses from the other members of Team Kynaston when they are home!

Well, mine could go either way with all of these but this was fun to read! Do you have a preference either way? I want a healthy baby but I think we both think it is a boy. If we don't see a little peepee when it comes out, will we be disappointed??
I am not good at guessing and I haven't seen your bump lately so I'll wait a bit - seems like you are in the middle, but my heart rates have been in the 150s I think!

According to the chart we should have 3 girls not 3 boys!!! LOL!

Here is my guess:

We missed you today!

Here are the rest of Team Kynaston's guesses ....

In typical Kynaston fashion they also want to know what the prize is????

PLease dont kill me for my prediction. Reason being, I am always wrong about the sex. And I went a full week over with my Bethy.
Love you x x x x