First day on the job

As I have resigned myself to being Sonic's support and coach for next year's WHW race, today was my first day on the job. The support role is a skoosh. I threw him out the car in the pouring rain at Beinglas Farm and stopped at various checkpoints along the way to Tyndrum. He did all the hard graft and I read a book and chucked a couple of gels out the window. I think I got a good deal. 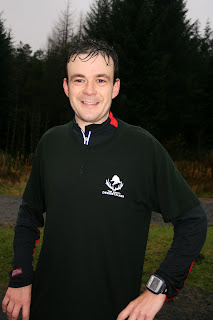 (A slightly wet and shell-shocked runner)

As previously mentioned we were going away to celebrate Sonic's 34th birthday. We stayed at the Isle of Glencoe Hotel, which was really nice. The room had fabulous views over Loch Leven, which I'm sure would be lovely on a nice day. Unfortunately today was anything but nice. Although it was quite comforting swimming about in the hotel pool watching the trees bend outside. Shame I couldn't use the spa facilities though.

For dinner we went along to the Kinlochleven Seafood Cafe, which I would highly recommend. It was definitely worth battling through the torrential rain for. The food is delicious and fresh, portions are huge and price is really reasonable. Sonic even ordered lobster and managed not take the other diners out in the process of opening it. Although he nearly lost a finger using the crackers. I went for the safe beat of scallops and smoked salmon. I even ordered the starter portions with a view to saving a little space for dessert, but I was totally stuffed.
Posted by Debs M-C at 21:43