Yesterday I toed the line for my annual 10K.  Yep, the last 10K I did was the same event last year.  And the year before that. And that. It's safe to say it's not my preferred distance.  But the Ignis Asset Management Women's 10K is by far my favourite race.  I love it.  Makes me proud to be a Weejie :-) And a burd.

﻿﻿﻿﻿﻿﻿﻿﻿ ﻿﻿﻿﻿﻿I know it would be easier doing a cut 'n' paste of the same race report each year, but I can't speak highly enough of this race.  It's magical.  And for once, Glasgow ladies are drinking in a different kind of spirit :-)  It's the catalyst for so many Scottish club runners, but attracts hoards of first-timers and charity runners.  Participants come in all ages and (quite literally) shapes and sizes.  Sonic hit the nail on the head when we arrived with "You know on paper, 10,000 women in lycra should be a dream come true.  It's just a shame it's in Glasgow"


This year was my 10th in a row. Considering my big race is just over two weeks away, the timing threw a big spanner in the training schedule, but I wouldn't miss it for the world. I'd crawl round on my hands and knees if I had to.

For once, I actually prepared for this and made the race a key event for 2012. Although I had to realistic about the respect I could dedicate to the distance, as there were quite a few 100+ mile week in the build-up. Although thanks to MJ the Messiah's lunchtime training sessions, I was confident a PB was on the cards.   Even the race conditions of  heavy rain and crazy-forced winds, didn't dampen my spirits.  There was a whole lot of fire in my belly. 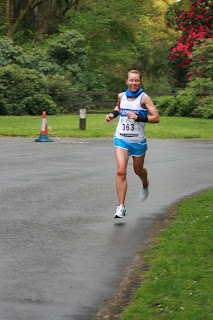 Well done to everyone.  See you there next year. Same time, same place.﻿  Although Sonic might send me some links for women-only races in Sweden, Holland, Brazil... :-)
Posted by Debs M-C at 21:14

Superb! Well done. A shame I missed it this year.

Hope everything is going well for the long one.

You rather modestly omit that your photo also appears in the ET pic of the start. Mind you the SDM might take umbrage.

Fantastic running Debs, you're flying at the moment. I'm sure this all bodes well for the Biggie!!

PS. Loved your interview on the WHW podcast - especially the 'warrior' part - fair made me chuckle lol x