In the good books

Although I've probably read most of the top-rated running books, I think it's good to look outside the sport for tips on ways to develop and improve.  Here are four of my latest finds from three (wildly different) triathletes and one table tennis player. Yes, really, a table tennis player.


I would highly recommend the following - in no particular order - for different reasons:  Chris McCormack for determination and self belief, Chrissie Wellington  for unleashing her amazing talent, Bounce for proof that hard work wins hands-down every time and Dick Hoyt for inspiration, love and family.

I'm Here to Win by Chris "Macca" McCormack.  It's a big of a stretch to say I read this, as I actually listened to the audio version.  This is a fantastic read - eh, listen - as Macca's no bullsh*t approach to racing and his and the never-say-die dedication puts a little fire in your belly.  He beat the odds to win the Ford Ironman World Championship in Kona, Hawaii for - twice! Macca's journey to athletic greatness is more than just one of physical perseverance.   He could have made a career out of rubbing people up the wrong way with his cockiness, but there's no shame in wanting to win.  He had dedicated his life to it after all. I flitted over his Ironman training plans suggestions, but his advice on nutrition, hydration and discipline are valuable to anyone participating in an endurance sport - at any level.

Bounce: The Myth of Talent and the Power of Practice by Matthew Syed.  Thanks to the lovely Tori (who I spent the first 10 miles of the G2E race chatting with) for this recommendation.   Bounce, written by a Commonwealth tennis table champion and Olympian, is a very interesting and thought-provoking read.  It basically argues that natural talent is of low importance, and that success can only be achieve though "purposeful practice" - actually 10,000 hours (approximately 10 years) of purposeful practice. The end result of this is practice is often mistaken for natural talent, when in fact the trait most high achievers have in common is a willingness to work harder than their peers and a belief that this hard work will drive greater improvement and success - not a belief in their fixed superiority.   This might sound dramatic, but this book has kind of lifted my self-imposed glass ceiling.  I'm the first to admit that I wasn't blessed with any natural flare or gift, but I work bloody hard.

"A cutting edge dissection – and ultimate destruction – of the myth of innate talent in the pursuit of excellence.  Read this book now – before it’s too late." Mark Thomas - Professor of Evolutionary Genetics at University College London. 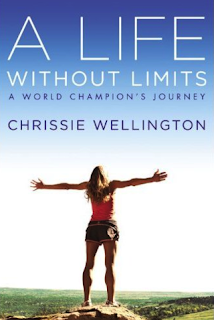 A Life Without Limits by Chrissie Wellington.  This is one of the very few books that I have pre-ordered on Amazon, and I started reading it as soon as it dropped though my letterbox.  In a nut shell, this about a girl-next-door from Norfolk who became the world champion in the fiercest of all sporting events.  In 2007, Chrissie shocked the triathlon world by winning the World Championship in Hawaii - as a rookie and completely unknown to the press.  This is a great read, even if you're not even into sports. It's generally just a good story of a journey that takes you around the world from her childhood in England, to to the mountains of Nepal, to the oceans of New Zealand, and the trails of Argentina.  Battling with anorexia, to training with a controversial coach and using sports as an opportunity to help improve people's lives - it's a must read.

If you ever need a kick up the ass, then Devoted by Dick Hoyt is the one for you.  This was another pre-ordered book, which I bought on a whim on Amazon Recommends.  It's the story of Team Hoyt and is nothing short of amazing.  I deft anyone to watch this video and not shed a tear. Not from sadness.  On the contrary, you will be moved by the pure joy.

Rick, the eldest son of  Dick and Judy Hoyt, was born in 1962. As a result of oxygen deprivation to Rick's brain during his birth, Rick was diagnosed as a quadriplegic with cerebral palsy and his parents were advised to institutionalise him and "forget about him". But Rick's parents refused. Determined to give their son every opportunity that normal children had, they made sure to include Rick in everything they did, especially with their other two sons.  Although Rick couldn't walk or talk, he was quite astute and they fought to integrate Rick into the public school system, pushing administrators to see beyond Rick's physical limitations.


To help Rick communicate, in 1972, they worked with a group of engineers at Turfs University to built an interactive computer.  Rick could select letters by tapping his head against a piece attached to his wheelchair. In 1975, at the age of 13, Rick was finally admitted into public school. After high school, Rick attended Boston University and after nine years he graduated with a degree in Special Education in 1993.

In the spring of 1977, Rick told his father that he wanted to participate in a 5-mile benefit run for a Lacrosse player who had been paralysed in an accident. Far from being a long-distance runner, Dick agreed to push Rick in his wheelchair and they finished all 5 miles, coming in next to last. That night, Rick told his father: "Dad, when I'm running, it feels like I'm not handicapped."

This was just the beginning, as they have since competed in over 1,000 events  including 70+ marathons - (Their marathon PB is 2:40:47!), duathlons and triathlons (six of them being Ironman competitions). Also adding to their list of achievements, Dick and Rick biked and ran across the U.S. in 1992, completing a full 3,735 miles in 45 days.

In a triathlon, Dick will pull Rick in a boat with a bungee cord attached to a vest around his waist and to the front of the boat for the swimming stage. For the biking stage, Rick will ride a special two-seater bicycle, and then Dick will push Rick in his custom made running chair.
Affectionately known worldwide as Team Hoyt, they are as devoted as ever, continuing to inspire millions and embodying their trademark motto of Yes, you can.

Great post Debs may have to get a couple of those.

wow, that last one is awe inspiring. I read Bounce myself recently and have to say it's changedf my outlook; I reckon I'm about 7000hrs away from perfection ;-)
Have you read the 4 hour body? Not just about phys but there's loads of good stuff in there

Some great recommendations there.

Once I've finished 'The Hunger Games' I'll have a look.