At the peak of training, prior to taper, I like to get in a couple of days of intense training. Well, when I say intense, I mean jogging and eating sugary treats for a long time. But the kind of training that makes you welcome taper with open arms - and battered feet.

Usually my race plans coincide with the GM's and we've had some cracking back-to-back runs. This year, we seem to be going our separate (race) ways. We're on a break and seeing other people :-) Or not as the case may be, as I was on my tod for my double, as The GM prepared her race face for Saturday's Highland Fling.

Last week, I took Thursday and Friday off work. The plan for day one was to get the first train to Edinburgh and run back to Glasgow. 55 miles + plus a mile or so at either end. I'll spare you the graphics, but I'd had stomach problems for a few days. Great for racing weight, but not so great for epic training. I really shouldn't have done it, but I never have the "put off 'til tomorrow" option.

From the off, I was gradually draining what little reserves I had and after 34 miles I was ready for chucking in the towel. Of course I made this decision after I'd passed numerous train stations and was now stuck in no-mans-land. So I back-tracked for three miles to Falkirk train station. 37 miles in the bank, but still deflated and gutted. Although I allow a little leeway in training plans, I really beat myself if I feel I've somehow "quit". After holding down a sandwich on the train (and I little bit of chastising myself), I decided I was going run the five miles home from Glasgow city centre. Taking my daily total to 42. Why? Because I'm just bloody stupid that way.

Then there was Friday's planned 25-mile run. A roller coaster of nausea, bonking, dizziness and brief moments of feeling pretty damn good - considering. Miles 1-15 were uneventful, 15-20 were an absolute disgrace and then 20-25 were great. Go figure. It just shows you can push your body through tough times. The two days left me with a bit of a confidence crisis, but in hindsight running on empty, feeling nauseous, burst and vacant was probably the best possible training for the GUCR. I am forever harping on about simulating race conditions after all. On a positive note, I was running so conservatively (that's upbeat for slow) that my legs didn't feel any effects. 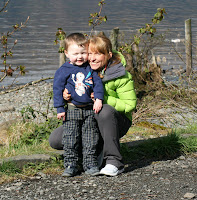 On Saturday, Sonic and I were on Crazy German duty at the Highland Fling. Actually Sonic was on back-up and Cairn and I just tagged along for the social. 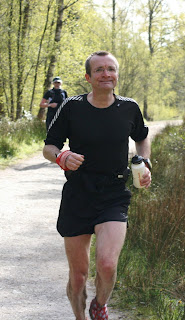 His German-style race tantrums have been well-publicised by his long-suffering wife and back-up crew. Mrs Crazy German has even went to the extreme to avoid such tantrums by signing up to ultra-races herself. Although her participation in the this year's WHWR back-fired when the Crazy German decided to withdraw his application.
I was thoroughly disappointed that he was on his best behaviour. I even gave him a free card to have as many hissy fits as he wanted. After all, what goes on the course, stays on the course. But nada. He was courteous and polite, for the whole 2.7 seconds he was at each checkpoint. Just look at the picture. The cheer comes so naturally...

What an awesome race it was to be. Click here for full results. Huge congratulations to everyone involved, especially John Duncan the new race director.

The Crazy German finished 7th with a cracking PB (and no dramas!) in 8:02. The GM ran an absolute blinder and was third female in a razor sharp time of 8:38. Mrs JK ran her first ultra and was third FV50 - AND wrote her first blog post. Mrs Crazy German ran a superb race in preparation for a great WHWR. 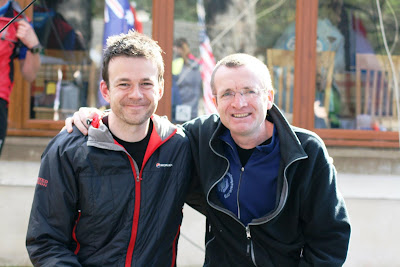 There have been some horrid tummy bugs this year. Hope you're feeling better and stronger. I'm not good on changing my mind if I've decided on a distance either, except to Al's chagrin, on adding a 'bonus' lap if feeling good - it's caused many a domestic;-). When you've got a nipper - you really don't have another day option so can sympathise. Hope the taper goes well.

Great to see you on Saturday even if you were stuck behind a camera!

Just for the record Katrina wrote a blog post after her Loch Ness Marathon!!

I'm so looking forward to seeing how your Grand Union Tace goes. You've certainly put the miles and preparation in.

Thank you again so much for the support!

I may have an idea to sort your tummy trouble though. Try without sports drink. And use that electrolytes drink I used. It's certainly worth a try.

Hope you've you've recovered now and are enjoying the taper. You've got plenty of miles in your legs to see you through. X