When I first set up the countdown above above we were well into triple figures and it seemed like such a long way away.   I can hardly believe it's this weekend.  I think I'm ready for it.  Well, I'm as ready as I'm ever going to be.  I'm just looking forward to getting started now.  Before I drown in race admin...and spend anymore money.  With flights, hotels, car hire, airport parking, I'm sure we would have been cheaper with a week in the med.  And that's before I even bought a whole new outfit (obviously!) and the race supplies.

I have a few minor worries.  One being navigation.  Or more so my lack of navigational skills.  I've poured over the maps and try to pin-point areas where I could wander, in the hope that Sonic can meet me and guide me through. And the lovely Drew Sheffield went out and videoed the whole 1.5 mile deviation at the 100K mark.

I'm not overly concerned about the distance.  That would be ridiculous, as the challenge is the reason why I signed up in the first place. To be honest, I'm not even sure what the distance is.  The race info states 145 miles, but that's only if I can learn to walk on water.  This Garmin info tallies it up to 149.4 miles. On the grand scale of things, four miles is a drop in the ocean.  Although, I guess on Sunday morning it will be more like a bullet in the kneecaps.

I'm confident that I've put in enough training.  But you never know if it's the right training until the day.  Or in this case, the next day.  The proof is in the pudding, after all.

Since my last running post, I used the 10K race as the start of the hard week as the build up for the race. Lots of miles on tired legs.  Two weeks taper is not ideal for me, but in order to fit in my beloved Women's 10K it was just something I had to work with.


After doing back-to-back steady runs and speed sessions during the week, I did a 45 mile run with the GM.  An out and back on the Forth and Clyde canal.  The way out was straight into a head wind, so the return journey was much more enjoyable.  I did have a slight scare when my right knee just collapsed as we were nearing 40 miles.  It was a really weird sensation like my knee cap was cramping/spasming.  Bizarre.  But after a mile of walk/jog is was completely fine, although it did play on my mind a bit.


﻿﻿
﻿Then that evening we were off to Callander for the club training (er, eating and drinking with a bit running thrown in) weekend.  I managed to abstain the grape juice until I squeezed in another 20 miler the next morning - rounding up another 100+ mile week.  It such an amazing place to run.  Just a simply out and back from Callander to Aberfoyle, on a glorious fresh morning. 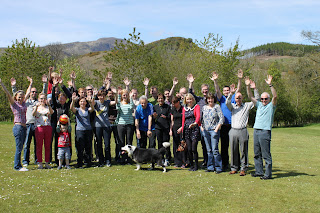 Then came the heat wave.

I love the Scottish summer.  It's my favourite day of the year :-)


Except this year, we were blessed with more than a whole week.  Although I may have whined a bit after my run and my face looked like a Ribena berry, it was good acclimatising for this weekend's race.  I had a mild fear about running in temperatures I hadn't had a chance to train in.  So last week involved plodding out lots of below par miles.

On Sunday, we were through in our fair Capital city as Sonic and my Brother were running the Edinburgh Marathon.  Apparently, Sonic was going to "jog round in under three hours".  If you're like me and a sub:three is only a pipe dream, then you might think this sounds a bit w*nky.  Personally, I knew it was never going to happen.   Boys + race + competitive streak does not equal "jogging round".  And guess what, when he went flying past me at mile 10 I knew I was right.

He went on to finish in 22nd place in a super swift PB time of 2:44.   It was good day in the office for the other half of the Bromance, as the Crazy German finish in 2:42! 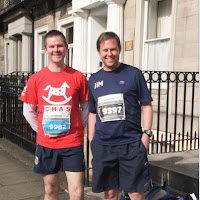 My Brother (right) and his friend Alistair finished in 4:50 in not only their first marathon, but their first ever race - raising £2000 for the Children's Hospice Association of Scotland.  And they're still speaking to me, which is a bonus.  I was really impressed they were still running - and smiling - on the finishing straight.

Well done to everyone who ran to complete or PB.  It was a lovely day for the crowds, but not so great for running.    Although I'm sure the great medal made it all worth while.

Anyway, I'm off to start on the packing.  I've got the outfit sorted, but I'm torn on the shoes.  I think I'll go for Hoka, but might be swayed to Brooks Adrenaline.  Then again, Sports Direct sent me a lovely new pair of Nike LunarSwift running shoes to try out. Some runners are chatting about trail shoes, so maybe my inov 8 Roclite. And one is contemplating racers, but even I draw the line at that.  Oh dear...what's a girl to do? Eh, pack them all of course.  What's a heavy suitcase to the athlete supreme who can jog out a 2:44 marathon ;-)

Have a great run on the canal - I'm sure you will! (It may cure you of towpath-related activities though...)

Good luck for a fine run on the GUCR, Debs. If all else fails on the navigation front, swim :-)
Best regards, xiain

I'm so excited - and I will just be following updates from home! Best of luck! May your hard training and preparation pay off and bring everything together on the day (and the next! :-)). Hope you have a great race!
Silke

All the best! Enjoy every moment of this awesome adventure!

Debs have a great race. I am sure you WILL have done the right training. Remember to enjoy at least soem of it!!
Alyson

Yeah, I think you've got all the prep and gear covered. One thing you've forgot to mention. Natural talent! You've got it by the bucket load.
Enjoy!

p.s. if you fall in think how rejuvenating that cold water will be for your legs ;-)

All the best Debs.

One of the reasons you wanted to do this race was to prove yourself in different races.

So go out there, do your very best and prove once again what a talented ultra runner you are.

Can wait to hear how it goes.

Have a great race. I'm looking forward to the race report :0)

Have a great run Debs. Will you not just wear the shoes that go best with your running outfit?