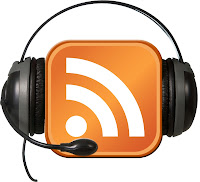 Running podcasts have come a long way since I first dabbled with the concept a few years ago. Initially I found them quite annoying, frustrating and even a little bit dull. I guess there's a lot more choice now - maybe it's the new blogging - and little more sophiscated than someone gasping down your ears and dishing out training advice.

I've always liked to listen to something when I out for a long run or recovery jog - usually music or the radio. I've even listened to a few books. Now I'm hooked on two podcasts series.


Firstly, the more general Talk Ultra, which is presented by Ian Corless and Ian Sharman and available free from iTunes every fortnight

It's really high-kicking stuff. The presenters themselves have a wicked collection of ultra-running accolades - the Sharman of the Ians ran 12:44 for a 100-miler. Which is rediculous! Coupled with conversations with the highest calibre of ultra-runners, it's pretty serious. If anything - and this is not a criticism - some of them are just too good to be entertaining. Factual and inspiring, yes, but sometime it's a little hard to relate to some sh*t-hot American talking about wheatgerm shots, organic puffs and mountains in their back garden when I chewing on Tesco Value Midget Gems (which incidentally, rock!) and dodging the junkies in Partick.

It is truly fantastic that they have - just for fun - pulled together amazing content and advice from the legends and elites, which you can enjoy at your leisure for free. Although so far I've found a few new additions to my bucket list.

Then on the same theme, but with slightly different feel, there's JK's West Highland Way Race Podcasts.  I like the light-hearted and homely contrast.  I'm definitely more of a spit 'n' sawdust pub, rather than a plush wine bar kinda gal. And when I buy newspapers at the weekend I buy the Daily Mail (her Majesty's finest - obviously!) and a rag for some dumming down.   Now, I'm not suggesting that JK's Podcasts are the audio equivalent to a red-top journalism.  On the contrary.  But I do think they'd get the people's choice award.  Mike Raffen summed it up the tone when asked in his interview about a running mantra he confessed to writing "Don't be a dick" on his hand. Can you imagine the sports' global superstars toeing a start line with that little inked reminder :-)  According to google translate, Kilian's mantra would be "No seas un pene"
It's simply runners of all abilities talking about their love (and fear!) of running and racing – regardless of how fast/slow/long they run.  It's not necessarily just for runners either.  It's for anyone who’s interested or involved in ultra-running – even from the sidelines.   And not just West Highland Way running either. OK, there’s a bias (the clue's in the name), but that’s becoming more slight as we move through the episodes. You don't even need to live anywhere near the West Highland Way or have any inclination to ever step foot on it.

There's lots of little gems of downright hilarity, along with lots of analytical wisdom and insights from those who have been there, done that and got the crystal goblet.  Granted, my opinion might be a little biased as I know most (actually, I think, all) of the runners/supporters/organisers featured.  Some bits are laugh-out-loud hilarious.  Often not the best when listening while running in public places.

Whether you need a big dollop of Fiona/Pauline spirit and enthusiasm, want to hear Sonic and the Crazy German splashing about in puddles, the domestic disturbance that is Lee and Dave (Lee is the domestic and Dave is disturbed) or advice from stalwart Duncan Watston on how to run 95 miles on a digestive biscuit and water from steams. Things are a bit more sophisticated since he set the ball in motion back in 1985, but to hear him utter "so, I gave up whisky" is worth it for the comedy value.

There are interviews with first-timers, multiple goblet holders, nutritional and medical advice, dealing with DOMS and injury, tips on gear and training, breaking through the pain barrier, coming out the other side, the magic of the course, back-up pointers and blogpost of the week.

From ultra-running's finest to ultra-running's funniest, both podcasts get a thumbs up from me.  Just be careful where you listen to them.  I was on a country road mindlessly absorbing the inspirational chat between Dr Andrew Murray and Donnie Campbell when I pracitcally dived into a hedge.  Forgetting of course the interview was conducted in a moving vehicle - with passing traffic - and I wasn't actually in danger of being moved off the road.

The West Highland Way Race podcast MP3 versions are available here or you can download them from iTunes.

Episode 15 features yours truly. Although don't expect too much.

Thanks for the recommendation!

Glad you are enjoying the podcasts.

Have you listened to Sharon's yet?

I'm saving the GM's for my race. Might save me calling her in the middle of the night for moral support :-) I've heard great things about it, so I'll keep it for a low point.

Thanks for the recomendation Debs. Really enjoyed JKs podcasts very inspirational. Straight 6 hours in the garden on Sunday flew by! Best of luck for next weekend.
Robbie