It was pitch black and raining outside, as I was applying suncream. Like ultra-distance running, the Scottish weather is fickle. You never quite know what you'll get, so best be prepared for all eventualities.

So it was my first Highland Fling. 53.3 miles will a little 6000ft of ascent and a nice 6am start. All uninviting factors, but I was so bloody excited.

Anyone who is interested in Scottish running blogs, will have probably read a few race reports, so I'm going to try and keep this short and sweet. Well, short anyway.

I went off too fast. Made a comment about road shoes being fine for the terrain...and then took an arse-over-elbow tumble down Conic Hill. Paid for my over zealous start in the second section. Picked up after Inversnaid and picked off a few runners in the process. At the start I had joked with JK as I turned my back on him and told him to get used to the sight - little did I know he would so easily oblige! :-) I Had a bit of battle from Beinglas with Helen Johnson - who has previously put me in my place. I was VERY brave with the beasts at Coo Poo Junction, as after 46m I didn't care if they killed me. I managed to pull away from Helen after Crianlarich, but she made me work for it.

The last few miles were a bit stop-start and every bump was a mountain. A girl was running out from Tyndrum and informed me I was third lady. Surely not. I thought Helen and I were going for 1st vet. I just assumed Lucy Colquhoun had finished so far ahead of everyone, that said girl hadn't noticed her.

I walked the last teeny weeny hill on the tarmac road passed By the Way. I joked with a smiling and cheering family that I was saving it for the final sprint. Heading through gates and down the rocky path, I heard bagpipes tuning up. I'm not usually a fan of the ol' pipes, but it was the most amazing touch. My own personal welcoming party.

I'm not even sure I heard anyone cheering as I approached the finishing gantry. I was in my own little state of euphoria. Mrs JK had to scream at my to "click in" and Muriel had to physically remove the chip from my wrist.

I spotted the Gibbering Midget who informed me I was 3rd, behind her 2nd and (obviously!) Lucy's 1st position. As we were jumping about shrieking, I thought she was sharing my excitement. I later discovered her shrieks were because I was jumping on her toes :-)

So finishing third (in 9:48hrs) behind two WHWR winners? That's nothing to be snuffed at. I think race organiser, Murdo, was just as excited at his top three girls as we were. 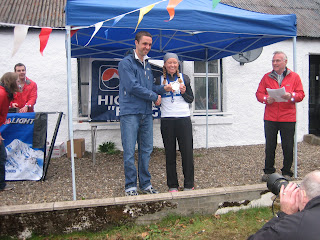 Sonic finished 3rd too - which was quite uncanny. Even more so that the Crazy German was just ahead in 2nd position. Considering Sonic and the CG train together and so do the Gibbering Midget and I...I think it's a good way to continue. 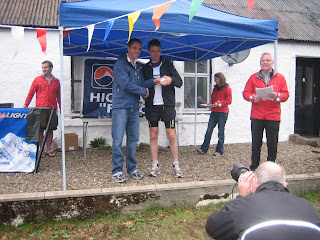 The GM, Karen Mac and I also won the first ladies team prize, so it was a good day for Garscube all round. 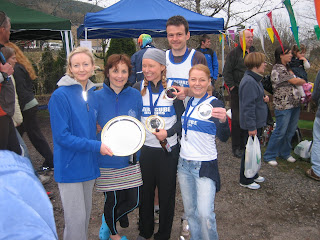 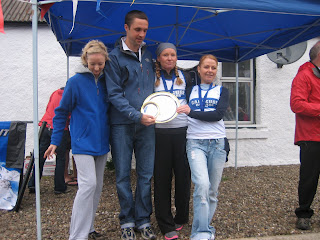 We enjoyed quite a few beers between finishing and the presentation. Funniest moment was when waiting for our team name to be announced, the hand of god (via JK) came from above and whipped the bottles of beer out of our hands followed by the words: "you're not going up there with them!" and the chorus reply: "Sorry, Dad!".

Big huge thanks to Murdo, Ellen and all the wonderful stewards. Congrats to all starters and finishers. Special congrats to first time Flingers, Silke, Karen Mac and Rachel I'm-never-doing-it-again-but-already-planning-next-year. Yes, ultra-running is like child birth. Refer to previous post.

It certainly was a cheery car on the way home you , me and the midget on an ultra running high with help from a few beers.

A great day for you and looking very good for you in June.

Great run,Debs.
Report worth waiting for:-))

Well done, Debs. I was thinking about you all day ( well maybe not at 6am). went to support some club mates doing the relay and kept thinking I wonder where various folk had got to.

You needed that sun-cream in the end - it was warm!

I cannot wait to get back to it next year - really starting to miss it - but you really help to keep me sane as running, and in particular long distances, is still very much a part of your life despite having a wee nipper.

Excellent run Debs. I have a feeling I'm going to see a lot more of your back .... as it disappears into the distance.

Recover well and then build up for the big one.

I think you made the right decision regarding Fling/London Marathon!!!!!

Superb Debs! So good to see you on the podium (again!). You must be a "Fling convert" now! I'm already very excited to see what will happen in June to you and Sharon. Everything will be crossed for you! But no pressure of course! :-)Silke

Well done to the Consani clan, you guys were fantastic.

Well well, did I not say you are in good shape? Both Consanis on the podium! What a result.
It won't be long and Cairn will join us on those runs. And with his parents he will be the new Jez ;-)

I am so glad you decided to do the Fling and I am sure you did not regret it. Congratulations!

Brilliant Debs. really amazing. I've no idea where you find the time and energy! Fi

left a note on my blog to yours but didnt know your time! thats amazing..really really well done debs

Fantastic result Debbie. Sounds like you had a great run.

Well done on a fabulous run. Looking forward to seeing how well you will surely do in June! Caroline x

Top work - so glad not to see you at any time between Milngavie and Tyndrum.. Bewdy !!