You know you're out running with the boys when the chat is all about races, strategies, tactics and plans. The Gibbering Midget and I usually like to maintain a certain level of shallowness. I'm not actually sure what we generally chat about, but we've righted many wrongs over our miles.

On Sunday I ran with the GM, JK, the Crazy German and Ian B from Milngavie to Balmaha. Perfect day for running. Glorious sunshine with a nice breeze. Thankfully the dry spell has sorted about the mud I experienced the week before. 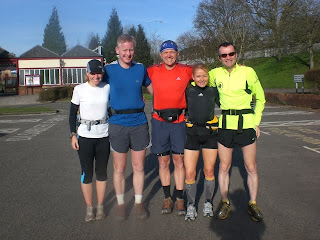 My favourite moment on the run was witnessing a conversation between JK and the Crazy German. JK is the master of plans and spreadsheets. He's probably the only person (in the whole world) who carries laminated sheets of section times. Anyway, he was discussing tactics, other runner's race times and how he could possibly shave 20 mins off his WHWR time. The Crazy German in his best matter-of-fact-humour commented: "It's simple, John. You just run faster". Genius, eh?

The GM wasn't feeling too great, so decided to call it a day just before Drymen. The fact that she's running at all is truly amazing. Her Mum is very ill in hospital and she is being Daughter, parent, nurse, career and chauffeur. After a hands-on-the-hip style stand off along the lines of "just LEAVE me" and "no, I'm not leaving until I know you've spoken to someone" I pushed on knowing that I probably wouldn't (eh, want to) catch the boys.

I was feeling pretty good, so decided to make the most of it. Finished in Balmaha in 3:08, which I was quite chuffed with. *Especially after my pre-run wine performance at the Pacepushers on Friday night. Thankfully on Saturday I felt better than I actually deserved. 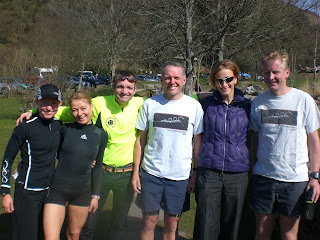 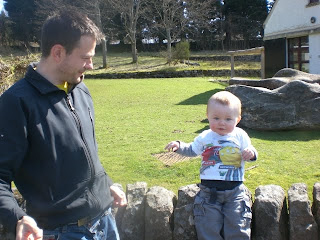 I'm loving my new Garmin 310xt. Not that there's anything wrong with my 205, but a girl needs accessories. Tried out my new Nathan Trail Mix belt (running handbag), which is just fabulous. 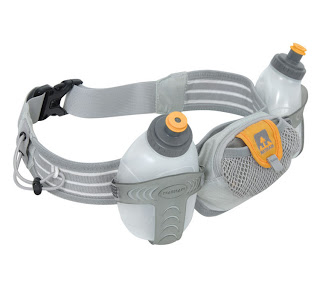 I had to laugh when I was putting on the belt and sorting out the straps. Whilst fitting I said: "I wonder what this clip is for" trying to force the strap round the loop, to which Sonic replied "Oi, stupid! That's to hang the belt up in the shop". Doh!

So I've almost got my kit sorted for the Fling. The unsupported Fling that is.

I've also been using my secret weapon of late: Deep tissue massages from the Polish Ambassador of Deep Heat. He is also Aileen Scott's secret weapon. I think Aileen and I might have (another!) wee battle at The Fling next week. I asked the secret weapon if he could possibly hurt her a little bit. He's still to name his price :-)
Posted by Debs M-C at 22:47

Good luck with the Fling. You are starting super eary I believe, so won't see you at the start or en route. Maybe say hi at the end!

Top one Debs - I can hear the smiles in your words.. See you next week - at the finish of course !!

I thought you had a great run on Sunday and are 'peaking' at the right time.

Good to see your illness is behind you.

If you need your splits laminated ... I'm the man!

Have a good run, hopefully see you at some point!

Debs, I'd like to make it clear that I didn't talk about races, strategies, tactics or plans at all - I don't have any tactics, strategies or plans, other than to try and get to the end as quickly as I can...

Good run. Hope someone switches the heat off for a week on Saturday - it was getting a bit warm out there towards the end.

you are rally in great shape Debs. You will catch John in the second half of the race!
(But don't tell him I told you that!)

and yeah that crazy german... he cracks me up all the time ;-)

Best of luck for a week tomorrow. I hope you enjoy it and reach your own targets.

I was on the WHW this week hiking for my birthday (see blog) and it was just gorgeous so I am quite jealous of you all running next week.