My dear friend the Subversive One has an uncanny way of crossing the line. Unfortunately it is more often the moral line and less often the finishing line :-) Fortunately for him, he gets away with it because a) it's quite funny b) he lives over the border and I can't therefore kick his a&s. Except this time there has been reference to chasing, grunting and bonking...just as he's heading north of the border. Worse thing is, my husband has actually joined in the banter!

Don't get me wrong I ain't the-girl-next-door type. Unless, of course, you live next door to The Priory. But the name "queen of bonking" isn't going to sit well outwith running circles.

See the Subversive One's blog for the full shebang

My latest step to Priory heaven was at the Press Ball. Yes, there was copious amounts of free-flowing wine. I tried to be quite behaved and had four glasses of water with dinner...and still ended up two sheets to the wind.

Half propping up the bar, Sonic pointed out that Mark Beaumont (cycled round the world chap) was standing behind me. My eyes lit up like Christmas trees and Sonic reluctantly agreed to take a picture of us for the blog. 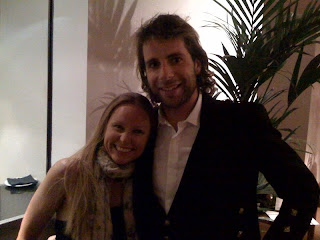 OK this is what I wanted to say:

"I know this is a bit cringe worthy, but I have a running blog. And my friend John the Blog has a picture of him and Paula Radcliffe on his, so I think this might rival that."

Note that's what I wanted to say. I reality, my wine-fuelled spiel was confined to: "Eh, eh, eh...I run!". He looked at me as if to say: "yeah, but I cycle" and Sonic slapped his own forehead.

So now every time I see Mark Beaumont on the telly, Sonic take great pleasure in saying "eh, eh, eh...I run" as I slither out of the room in shame.

If I was only slightly sozzled and my usual gobby self I would have probably said something more appropriate like: "If you're going to gatecrash a party, the least you could do it shave. You're not on your bike now. Gypo."
Posted by Debs M-C at 20:13

Very impressive .... but remember I also have a picture of me with Dame Ellen MacArthur as well!!!

I have pictures of me and David Haye, Lloyd Honeygahn, Wayne Alexander and Boris Johnson on my blog. So tell me again....who is the long, haired unsaven twat in your photo?????

So who first called you 'the queen of bonking'? The Subversive One (who AFAIK hasn't done so yet) or, or, or...

Thank you for high-lighting that point, Pete. What say you, Mrs M-C, aka QOB?x

sounds like a challenge - to get the most famous / ridiculous celebrity photo on your blog. Having said that, my technical skills and lack of a camera mean it's a challenge to get any photo on my blog..

see you tomorrow (at the end hopefully)

Mark Beaumont runs the world and ends up with a photo of Debbie! Did you send him a copy?