From the House of Kings to the Fort of Bill

On Saturday I did the last long run on the West Highland Way before race day.

To save time and repetition I should just say...

Famed for his regular and thorough updates, John the blog is always first on the case. When I first met JK, I knew so much about his life and hugely popular blog, that I didn't know whether to shake his hand or curtsy. Of course now he's my buddy, I just mock him for his spreadsheets and having way too much time on his hands. Although I think it's down to being more disciplined than most bloggers. JK pretty much eats, sleeps and breaths the West Highland Way race and has the full backing of his long suffering wife. At the post-race presentation, I moaned: "Now we've got to endure the post-race analysis" she replied: "I've told John he's got four weeks and then I don't want to hear about it". FOUR WEEKS?? Now I refer to her as Saint Katrina.

Well if you haven't already followed the links to JK's blog, then I best give you my account of the run. Although I've pinched the visuals from his blog :-)

The original plan was to run from Kingshouse to Fort William (my favourite stages) with JK and his two pals, Stevie and Chris. There was a bit of a debate about doing earlier sections - to cut out some of the travelling - but I was adamant that I wanted to do the latter stages as I think do the final sections would be make for better race prep. Anyway I managed to convince them to stick with the plan, so we only had to deal with the small matter of car sharig, pick-ups, bus tickets and dog sitting. Sometimes these training runs are a logistical (and expensive) nightmare. A 200+ mile trip to run 24 miles! Oh well, you can't beat training on the course, can you?

JK, of course, came armed with his laminated spreadsheet of times/splits/pace for each mini-section (remember how I mentioned too much time?). My plan was much less structured. I would run on the runable bits and walk on the steep bits. Genius, eh. I really didn't think I could keep up with their 4:15 schedule. I honestly didn't expect to see them after we left Kingshouse. 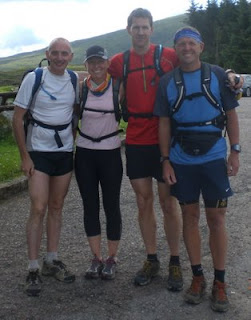 (JK, me, Chris and Stevie - picture stolen from JK)

I was very pleased to find the pace was fine. Apart from the steep ascents - where my leg length became I disadvantage - I kept up quite comfortably until Kinlochleven. I told them to push on up Lairig Mor and I would meet them at the end. Pretty soon JK and Stevie became dots in the distance, but I could see Chris' red t-shirt the whole way. Everytime I closed the gap, we would hit a hill and his six-foot legs would be carry him over. I'm not a very competitive person, but I kept imaging it was a female race participant in the race. The t-shirt wasn't quite a red rag to a bull, but I was pretty sure I wanted to catch him. Without racing, of course.

There were loads of hikers out on the trail. I think most groups start at the weekend/Monday, so by the following weekend they're doing the final section. Given that, Lairig Mor is always busy on the Saturday. I passed two (possibly) Dutch trekkers who informed me (in their best broken-English) that the two runners in front had asked them to give me a message but the couldn't understand what they were saying, I was slightly concerned but pushed on. Five minutes later I passed a groups of lads who had stopped for their lunch. One asked if I was Debs and when I confusingly replied yes, they all stood up and shouted "Go, Debs!" The laugh really spurred me on, thanks JK.

I finally caught up with a lost Chris coming out of the woods before the descent to Fort William. I think he was starting to wilt, but was still in good spirits. We covered the last few miles together - with me gibbering and frequently informing him "not long to go". When we passed through the Braveheart carpark and hit the pavement, he started to slow. Why does hitting the hard surface always make you feel like someone has just whacked the back on your knees?

I finished in 4:14:07 which is was absolutely delighted with. I never thought I could keep up with JK's schedule. Turns out he couldn't stick with it, as finished in 3:57 with Stevie a few minutes behind him. And Chris a minute behind me. Great performances all round, me thinks. Looking back on last year's training report, the fastest I have ever done this section (as a stand-alone run) was 4:43.

Check out JK's video for the finishing footage. Obviously I didn't realise the finish was being filmed. I thought JK was taking a picture. I look at bit of idiot jumping about, but hey ho, at least I could still jump about. 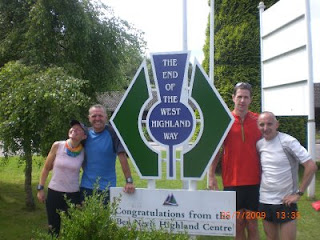 We had an hour and half to kill before getting the bus back to Kingshouse. Plenty of time for some well-deserved ice cream (or a feast for a family of four for Stevie) and post-run chat.
Posted by Debs M-C at 09:13

I had to laugh at the bemused look on JK's video of all the people passing by wondering what the heck the 4 of you were all doing at the finish.
Great times all round. You are gonna have a great Devils race babe. Don't go getting a golden boot tho...;-)

Great report Debs. It was great running with you and enjoyed the chat on the run and on the bus and car back.

I'm glad you encouraged us to do that section.

No presuure but I'm expecting great things from you at the Devil's!!!

Debbie, To say I was wilting when you found me is a nice way of putting it, had you been five minutes later, you would have found be sitting at the side of the road refusing to go any further! Thanks for your company, for carrying me the last few miles and being Mrs Logistics for the day. Good luck for Devil's - Hope weather and your form is as Saturday was - Chris

Debs, superb performance.
I did that section in 4:02 for a 6:34 finishing time.
You will have a great race (and so will John!).