This was to be the pièce de résistance. A 45 mile run on the number seven cycle route from Prestwick to Glasgow. Not exactly inspired, but it ticked all the boxes. Flat (well, for Scotland), tarmac and long.

The downside to road running is the lack of wow-wee scenic moments, but the advantage is you don't have the same logistical/travelling issues. For a point-to-point run, you can just jump on one of the frequent trains, go as far as you want and run back. Simples. For WHW runs, half the battle is the organisation.

I got the train from Glasgow and the Gibbering Midget got on at Kilwinning. The route we were running, winds pretty much parallel to the train tracks. It was quite unnerving to know it took Scotrail's finest 50 minutes to cover the same distance we would be running.

Off at the breezy coastal town of Prestwick, first stop was the al fresco powder room, as the GM duly announced "sitting on vibrating things make me need to pee". You gotta love her innocence.

We started running on the promenade along the beachfront...until it run out. We knew we were heading in the right direction, so made a detour along the beach and then across the golf course (all part of the adventure) until we got to Troon. Then it was clearly signposted and we were on our way. 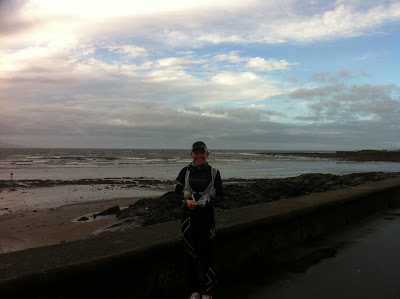 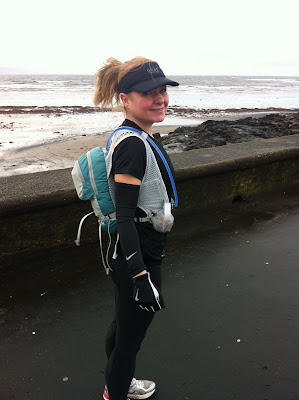 Despite previously posting the weather forecast, we were really lucky. A bit breezy by the coast, but when is it not? Lots of glorious sunshine and only a few showers. And as a double bonus, apart from a undulation between Irvine and Glengarnock, it was pretty flat. We thought we'd won a watch.

The GM had stashed a drop-bag of supplies at Glengarnock (25 miles), so we had a pit-stop and a refuel on sandwiches and coke. Followed by unladylike belching and yelps as we got going again.

On through Lochwinnoch, Howwood, Johnstone and off at Paisley. We took the most direct along Glasgow Road passed Bellahouston Park.

Still feeling good, but we didn't taking into account that is was high-school throwing out time. Gobby wee boys and muffin-topped giggling girls were quite testing when our tolerance levels were at an all time low. 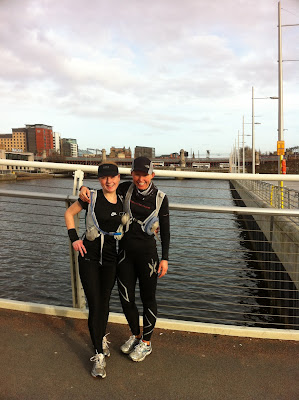 Just before 4pm we hit 45 miles at the Squiggley Bridge in Glasgow's city centre. 6 hrs 41mins. Average pace 8.55m/m. I doubt there will be many times we can say we ran through three Scottish counties. Starting in South Ayrshire and taking in North Ayrshire, Renfrewshire and finish in Lanarkshire. Magic. 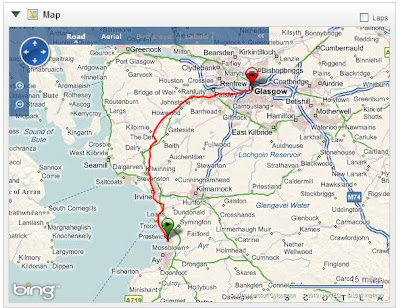 Fantastic! Well done you guys. Looks like you're all set for Perth then!

Well done you two! You are well prepared if you ask me! Can't wait to see you on the day! Silke

Good on ya girls! How your legs coped with that distance on Rd I have no idea! Oh and flat flat flat - no change in pace - ughhh! Good job! Loved the line: vibrating things make me need to pee! LOLed! Best of Luck for Perth - Taper time now?

Hey girls...good stuff!!...I got a copy of a booklet (free) from Paisley tourist office of all the Scottish cycle path network routes and have been using these for my 'longer' run routes over the last couple of weeks. Although, they are anything but inspirational and scenic .They have been really good to sort out my pacing and ramp up some decent milage and as you say are so much easier in terms of logistics. The cycle path from Lomond Shores to Tarbet is the exception (if you dont mind the odd bit of noise from A82)as its a really nice run up loch Lomond side. Im not crazy about road running anymore but its a means to an end i suppose. Happy running, and good luck girls with the 100K training.

amazing time! you two are incredible!! can i borrow your legs??

Hi Debs, thats a great time for 45 miles:) Well done. I was wondering, where does the route come out in Glasgow? I'm hoping to run part of it on Friday? Richard