It was worth it to Perth it

After last weekend's exertions, I assumed I'd feel a little worse for wear at the beginning of the week. Not just fatigued, but I expected to hurt. Apart from looking and feeling like I could be cast in Dawn of the Dead on Monday morning, I was generally OK.

On Tuesday I did an 8-miler. No idea what pace it was, just nice and easy and comfortable. I suppose I was assessing the damage. Everything felt fine, so on Wednesday I decided to do the session with the boys with the jet-propelled legs. I started a wee bit early with the view to them bombing passed me somewhere near the end. I must have felt ok as I never even caught a glimpse of the boys with the jet-propelled legs.

On Thursday night I went along to the club, which was billed as an easy run ahead of the National X-Country. A show of hands at the pre-run briefing highlighted that only three of the 60 or so there were actually doing the Nationals though. Thanks, guys. I ran up to the Garscube estate and back home afterwards to clock another 6 miles. I sauntered round the 6 mile route with the lovely Emma. You know you're not exerting yourself when you spend the time house spotting/nosing and talking wedding chat. Emma, one half of Garscube's answer to Barbie and Ken, is getting married in May. It's the week after the women's 10K, so we talked about having Emma and club girls dressed-up as bride and maids.

Friday, rest day. On Saturday morning,the GM and I headed to Perth to recce the 100K course. It was an early rise, as we had to get the laps in before scooting over to the National X-country in Falkirk. Yep, a 170 mile round trip to run 10. It was kinda like Thelma and Louise, but with the life sucked out of it. And that was before we step out of the car into horizontal sleet. Deeply unpleasant. After seven laps I'd lost the will to live. Speaks volumes, doesn't it? Only 35 to go.... It was worth the trip though. I like to know the course, to go over it in my (crazy) head. And as Garmins are prohibited on race day, I can work out pacing according to lap times. Allegedly.

Then it was off to Falkirk to meet up with Sonic and Cairn. I took some pix of the Men's' race. Click here if you fancy a peek.

The races are seriously competitive, with the creme de la creme out show. It was the first time I'd been to the event and it was awesome viewing. Comical to see that the further up the front the runners are the skinner they are, the less clothes they were wearing (in close to freezing temperatures) and the more snot and gob they had on their faces. But my god, they can fairly shift it. It's not for the faint hearted. Seeing some of the facial expressions made me understand why Gary-Next-Door (and captain of Clydesdale Harriers) says ultra-runners "show no emotion". Granted, it's less fierce, but when I'm blubbering, hallucinating and hurting from the eye-lashes down, I tend to display a lot of emotion. And a snotty nose is the least of my worries.

Sonic ran a belter and came in 90th overall. 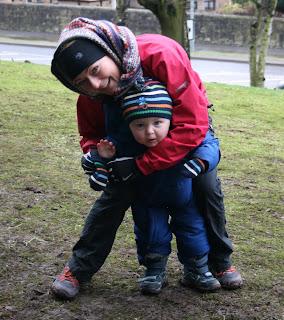 On Sunday morning, it was Sonic's turn to be up and out sharp, as he had planned a Kilpatrick hill run with JK and Bob. Normal people might kick-back with a fry-up and the Sunday papers, but I used the morning to get on with a long-list of domestic chores.

When Sonic got back, I went for a steady 10-miler round the west end. Poor Cairn really is a relay baton these days. He probably thinks his parents have separated and nobody has told him.

Thankfully the sun made a rare appearance on Sunday afternoon, so we got to go to the park. You know your son hangs out at too many races, when he shouts "Ready. Steady. Go!" at all the runners passing by. 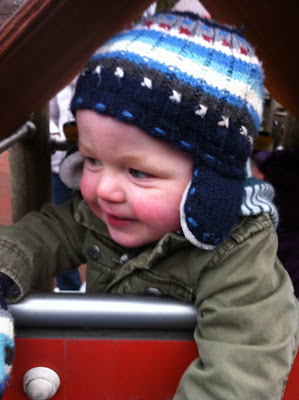 The perth course drove me a bit mental it's fair to say.

As for the XC, awesome stuff, made me feel like a beginner all over again though...

Loved the elevation of the Perth course!

Just think ... when it's all over you can get to some 'proper' ultra running.

You're all mental... the Perth course is lovely :-)

You don't need a GPS on the North Inch - they have put markers in the tarmac every 100m or 200m, and you probably won't get lost.