The sun can take its hat off now

I must confess, I'm kinda glad this heat wave malarkey is nearly over. I know I'm quintessentially British and will therefore moan about the weather regardless, but I've so had enough. For those outwith the British Isles, when I say heatwave I mean 25 degrees. That's generally the height of the great Scottish summer. It would be lovely if you could spend your days with a book and some pink lemonade whilst someone sparks up the barbie. But in reality, I have a car with no air-conditioning (an excuse to use Sonic's), I work in a windowless cupboard and Cairn and I have so much sunblock on we look like THE shiniest people in the world.

Being of the fair and freckled skin variety, I'm quite fanatical about sunscreen. Sonic - relying on his fading Italian genes - isn't. I've had many a full-scale barney with him as he refuses to wear anything more than SPF8. And that's only after being fried. Anyway, whilst spectating at the Edinburgh on Sunday, I didn't even bother. So after four hours of baking he succumb to the high factor. Too late though as his bare feet (exposed for the first time in years) had taken the brunt. Now he has a lovely red flip-flop design on his feet. I'd post a picture, but my blog would be shut down for health and safety reasons. 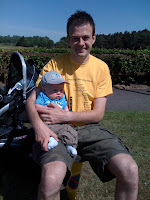 (Sonic and Cairn at Edinburgh Marathon)

Well done to everyone who survived the heat (and empty water stations!) at the Edinburgh Marathon. Special congrats to Jill, Maz, Kaz and Anita who were running their first marathon. And to the Crazy Germans and Pacepushers. Usually I feel quite jealous watching races, but this time I was quite happy to only have sore hands from clapping. Oh and a very sore throat, as I was screaming like a banshee.

Despite my dislike of running in hot weather, I have managed quite a few runs. I was out with the baby jogger again last Friday. I don't know whether it was the heat or sore arms, but I had a stinker of a seven-miler. I was so glad it was over. I didn't get a chance at the weekend, but did some step reps on Monday night and a 10-miler last night - three minutes slower, but I actually quite enjoyed it.

Stop press: Sonic and I have found a TV programme we both like. I don't usually have the concentration span to sit and watch a full programme. Sonic always gets annoyed, as I get up and wander off to potter about. I do, however, love a bit of reality TV. Britain's Got Talent, X-factor, Big Brother - all the cr*p of the day really. But I don't do soaps or anything you have to follow. Anyway, our Skybox is full of Sonic's faves: Heroes, Lost, Fringe, Terminator, Prison Break and some very bizarre documentaries. All of which I don't really understand. I kid you not, he once sat through a documentary on how to make windscreen wipers. Really! As my eyes were boring into the side of his head he casually said "it's only got 15 minutes left". That was 15 minutes of my life I'll never get back. I digress...has anyone seen Lie to Me?

It rocks! And we both like it. But now that Britain's Got Talent has finished it's time to start with Big Brother and America's Got Talent (which always has a special class of nutter) woohoo!
Posted by Debs M-C at 20:50

Labels: Edinburgh Marathon, Lie to Me

I like Aircraft Crash Investigation. I just don't understand how you don't like it. Okay perhaps watching it just before flying isn't the best but it's really interesting. Far better than Britain has no Talent.
Loved the post... very funny.... :-)
Mxx

It's fun when you find a show to watch together. If 25 is a heat wave, man, some of the days last week you would not have enjoyed! I like it around 20, we had a perfect day here on Tuesday. The baby jogger can have some crappy runs - that thing is heavy and if it is hot and hills are involved, stand back!!

Nice blog entry, the sun catches me out occasionally still; culturally exotic, physically less so with blue eyes... sun burn on feet is dire watch Cairn on trips to the sea. The UV is strongest at the water / air interface i.e. paddling also the area most likely to have sunscreen washed off.
Seen all episodes of that TV program, first are good material dries up quickly, there is a torrent for Emotions Revealed Paul Ekmans book - Mr Lie to Me.
Let me know if you can not find it.
Have you seen the micro expressions test at my blog.