Well that's what I get for mocking my weekend's race attempts. I had to bow out of being last runner at the Milgavie and Bearsden 10K, as the only course I was capable of patrolling was the route from the sofa to the bathroom.

No I wasn't struck down with wine flu - not a drop passed my lips. Honest! Although Sonic was concerned I might have swine flu...as he wouldn't be able to run this weekend. I don't know what it was but I went to bed on Friday night feeling a bit bloated and ropey and in the earlier hours on Saturday I was head down in the toilet. Many trips later (sometimes not quite made in time) and I was a shaking/freezing/boiling/moaning zombie. It continued until about lunchtime. I couldn't get off the sofa and spent most of the day sleeping.

I don't do sick. I could probably count on my fingers how many times I've been ill in my life. I've had one day off work in the last 10 years and that was because I was so hungover that I couldn't get my head off the pillow. Even then I called in to take a holiday. I won't even admit I've got a cold. I'd have to be bleeding out my eyes before I'd admit defeat.

Thankfully it was over quite quickly as I felt loads better by Saturday night. And by Sunday morning I felt well enough to run round the Vale of Leven 10K with Gillian. I'm a bit of a sucker for doing what I say I'm going to do, as I don't like letting people down. Nothing else would have got me to that start line. Surprisingly I felt OK and enjoyed the run. I tried to get Gillian under the hour, but failed miserably. Actually I think I helped her get her slowest time ever. With a bit of training (Hills, Gillian!) it would be more than achievable, as the best miles were the last two miles of the race. 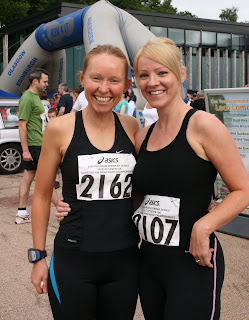 (Gillian and I - raring to go) 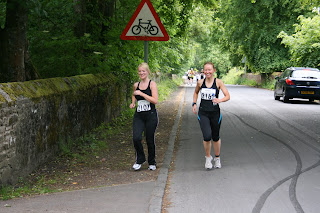 (gearing up for the sprint finish) 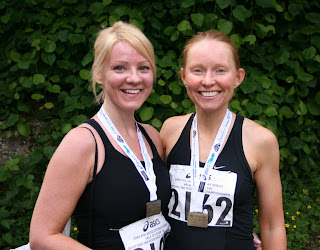 (one more medal than Sonic) 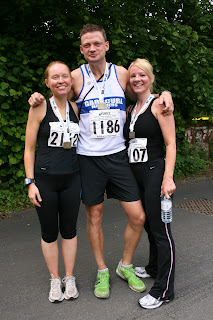 (with Brother Sonic and Gillian)

So with four days to go until the biggest race of his life, Sonic has now developed a close bond with the toilet. Oops. I'm so in trouble. Especially because he's a boy and therefore his symptoms are so much worse. It started this morning and should only last a few hours, but I suspect he might milk it a bit.
Posted by Debs M-C at 06:56

If I catch it you're both in bother. Mind you with this rain the WHW may well be washed away before Saturday.
How did you get that photo approaching the finish? I haven't even downloaded it yet.

Your performance will come back its a big event having a child I've been told plays around with the endocrine system, which has its own timescale to get back to equilibrium. that said you are still faster than me!

I know this will be devastating especially after your woman flu.
Koper is too much of a trip this time I have decided to stay the final day here http://www.bohinj.si/camping-danica/
Swiming, reading and walking.
So don't wait up for the update.

I must remember this time - do not to get blind drunk narrowly avoid a fight with a local and stagger to the line too drunk to drive.;¬)

Hope you got plenty of help when you were sick!

Yip, that bug's being round our household too. Luckily it passes quickly (no pun intended!) Hope junior doesn't get it too.

Looking forward to the weekend

Oh no! I met Marco on Saturday for around minute or so. Hope he didn't have time to pass on any bugs to me. Don't fancy the chances of the last runner in the Milngavie 10k, however - if he's caught it he'll be saying that's the last time he ever runs with Marco :)

And ps, sorry to hear you were ill

I am the same way and have to do what I Signed up for or told people i was doing. I hope Sonic feels better, yikes! great job pushing through!