Sonic's Fling in the Highlands 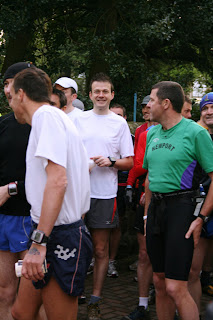 My wise pre-race words to Sonic were: "Run your own race and ignore everyone else. If you don't get the time you're after, you can say whatever you want at the end: You got injured, you blew up, ran out of energy..anything. Just do not tell me you went off to fast". Now anyone who knows Sonic, will probably be chuckling at my ambitious advice. Especially when six miles into the 53 miles, he appeared on the horizon right on the shoulder of the course record-holder and North Face sponsored ultra-human, ultra running, Jez Bragg. I was rolling my eyes so much, it took me nearly an hour to regain focus. 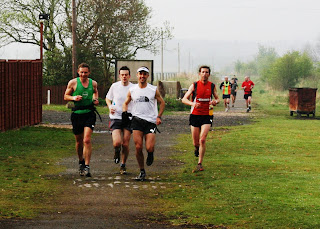 And, surprise, surprise, 12 miles on at the first check-point in Drymen he was still in hot pursuit. Even one of my "LOOKS" didn't dampen his sprits, as he was off bounding down the track like a Labrador that had been let out a car.

Needless to say, 20 miles in, his arrival at Balmaha was somewhat less jovial. He was 20 minutes ahead of schedule, but still in good form. Sonic must be the easiest runner in the world to support. All he fuels on is energy drink and gels. Throw in the odd jelly baby and sandwich and my job is pretty simple. So other than the fact it takes me almost as long to drive as it does to run, I had loads of time to chat, cheer and take pictures.

Because of the staggered start - females and vets start at 6am and the rest start at 7am - there was plenty of action and support teams about. It did get a bit confusing trying to work out the runner's postitions though.

Sonic was still 15 minutes ahead of schedule at Rowardennan and still looking fit. He set off on the 14 miles of the Lochside, whilst I started the journey of driving round to the other side - which can take up to an hour and a half. Although runner's always moan about the Lochside, I think the support teams get the short straw.

Watching runners appear over the bridge at Beinglas Farm is like watching the Dawn of the Dead. The lochside is notorious for zapping every ounce of life out of you. What's worse is that hitting the top of the Loch is like almost the end, but in reality there's another 12 miles of very undulating (f-ing hilly) terrain to battle. 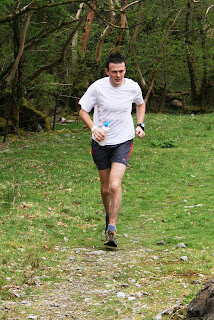 Sonic appeared in Beinglas looking very white, after losing all the time he'd gained in the first section. He was still on target for his race goal of 8:25, but was in danger of losing it. Especially as his knee was throbbing and the girls were trying to get him to take a seat - and I was pulling him off it and telling him to get a move on. I know, I'm a bad bitch, but I only had his best interests at heart.

I stopped at the A82 about four miles along. I really hate this support point. I always feel slightly queasy stopping and getting out the car, whilst cars are flying passed at 60/70/80 miles an hour. It's a pretty straight road, so drivers really put the foot down and motorcycles dice with death. You can imagine how far my jaw dropped when I saw another support team doing a three-point-turn. WTF??

After I packed up my bag of goodies and put Cairn in his baby carrier (which is almost an operation) I headed down to the track with kathy and Silke - Dr Crazy German and wife of Sonic's biggest "friendly" rival, Tom the Crazy German. Sonic had stayed ahead of the Crazy German all day, but I knew when he appeared first my weekend was in danger of going t*ts up. Thankfully I was entertained by the Crazy Germans shouting at each other in their Mother tongue and throwing sparkling mineral water everywhere. What a diva you are Tom :-) Most people would happily cool off with some tap water. But no, not you.

Sonic arrived soon after. Walking. Of course the only thing he requested was the only thing I hadn't dragged down to the trail, his road shoes. So off I scrambled running through the tunnel and up the steps - with Cairn strapped to my front and a bag of food on my shoulder. After shouting at Sonic to change is shoes faster and stop sulking about "everyone passing" - everyone being the Crazy German - I gave him a knee strap handful of grapes and pushed him onwards.

My last support stop was to be the Wigwams, which is about 2-3 miles from the finish. I drove along to the finish in the hope of seeing the winners crossing the line, but I was too late. Jez had broken his own record and finished in 7:19. Now you can understand my previous angst.

Back at the farm I met up with Mrs JK, the long suffering wife and support of, obviously, JK. Although he was still on for a storming time, he wasn't his usual cheery self. As previously mentioned, I'm convinced little birds dress JK in the morning. But what was this? Could he have been close to spitting the dummy? :-)

After sharon went blazing through to secure a fabulous third place, I was willing Sonic to appear so I could get to the end to see her finish. I didn't have to wait for long as he came jogging/hopping down the trail in a much healthier state than the last time I saw him. 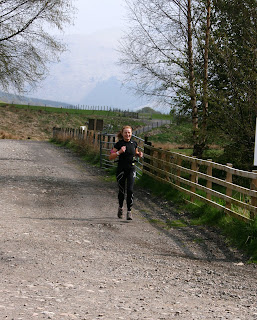 So back in the car, it was nearly over. And I was bloody exhausted. Between getting up at 4am, driving, supporting and looking after a three month old baby, I barely had time to stop let alone eat or drink anything.

Sharon finished third lady in a fabulous time of 9hr 41. And still smiling. As she had to leave, I got to pick up her prize - much to the confusion of many spectators. 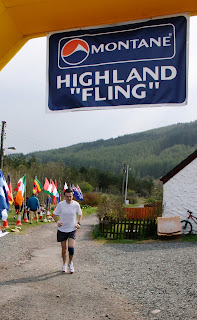 Sonic finished in 8h:52. 15th position out of 242. Although he seemed quite dissapointed, I was totally over the moon for him. And to be fair if he knew that was going to be his time before the race, he would have been delighted with that. No guesses as to what he said his race faults were :-) I could say, he's just a boy at a bad age, but his plans for sorting out his race strategy was short-lived. On the way home he was still analysing the top runner's pace and splits. With he learn in time for the big race in June? Stop shaking your head. I've got eight weeks to drum it into him...

...in one ear and out of the other

But at least Sonic and the Crazy Germans are still pals. Although it looks like Sonic was off to drown his sorrows. 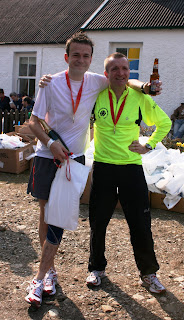 Big huge congratulations to everyone who ran, supported, organised and marshalled such a fabulous race.

He did say to me at the end that he thinks my advice to work on a 2 year plan might end up as a 20 year plan so you've got a lot more this to come!!!!

I reckon you might have more success with baby sonic!

PS I think I was at my lowest when you and Silke saw me at the A82 but I was pleased to finish strong.

I'm going to think seriously how I can sort out my food strategy!

A great and hugely amusing report Debbie. I'm sure you have analysed Marco's performance perfectly. How on earth will you get him to start more slowly on 2) June? Why don't you get the Tortoise and Hare book and get him to read it to Cairn? Who knows, the message might sink in :)

Despite his fast start, under 9 hours is still a brilliant time - many congratulations to you both. And I don't suppose you managed to get any film footage of John in his less than happy state?

I think you might need to employ very heavy ankle weights to slow your (older) boy down. Either that or make him carry Cairn.

Great report Debbie! I was laughing out loud when I read the bit about the sparkling water! He would bathe in it if he could! But we were not really shouting at each other, the German language just sounds as if you do! Really! :-)

Great report and just wanted to say thank you so much for all your support on Saturday. You were amazing. :-)
Mxx

Brilliant writing. I was in tears laughing (don't tell Sonic!).
A small question though: Are you not coaching Marco? If so, why was his timing so bad? It's all YOUR fault, isn't it!?;-)

Thanks for borrowing wee Cairn for a cuddle! He is soo cute!

PS I am only kidding. I have the best support team in the world.

Can I have dinner again?

So how long did my gorgeous wee nephew have this tshirt on before he threw up down it :):)