Well, Sara, where do I start? My closing words to Sara when we completed a 12 mile trail run was: "at least I'll have something to blog about".

It started before I'd even laced up my shoes. My original plan was to run with the Millies, but Sonic had booked a sports massage and wouldn't be home in time for their kick-off time.

The Pacepushers were going to join us, but they decided on WHW run. Sonic was hoping to have an Xbox evening the Pacepusher though. So Sara I planned our own run starting at 6.30pm. Sara, notorious for her tardiness, was on time. Sonic, also notorious for his tardiness, wasn't. It was closer to 7pm when we embarked on our journey over Stoneymollan to Cardross. All was going well. It was a nice clear evening, so the views over Loch Lomond were amazing. After heading through Cardross we turned onto the farm tracks to take the off-road route to Renton. I had just warned Sara about the evil sheepdog, when said evil sheepdog and two of his equally evil pals appeared. We tinkered about for about 10 minutes, but there was no way they were letting us passed. As previously mentioned, I'm not very good with dogs, so I wasn't going anywhere. The dogs were down on their front legs trying to chase us back down the track - and I was taking the hint. Then we saw the farmer coming up the road in his tractor. After what seemed like eternity he approach and we cowardly asked if he could help us passed. God, if felt about five years old. He seemed suitably unimpressed with us, but admitted they were "quite fierce". After we made it through we were half expecting the farmer to set them after us, so we were up the hill in record time.

Five minutes later we were surrounded by cows. Sara's a farmer's daughter so she stomped on through - with me attached to her. Despite my love of the great outdoors, I'm still convinced that all coos are bulls. One day I'll know the difference. Why do animals that bloody HUGE cower away from humans? I bet there's a story of a cow who killed a human. I'll google it later.

We passed through the last farm pretty much drama free. I was slightly nervous as the last time I was on the route a manic dog came flying out from no where.

Back on the tarmac, a mile from the main road, I thought we were on the home straight. But no safari would be complete without some neds (that's undesirable young men to my international readers!). Except these were neds with a difference. They stopped their car and asked us if we'd seen two Rottweilers. WTF?? After a series to "you're joking"/"we're not joking" they informed us that the dogs had got out of the North Lodge, as someone had left the gates open. I was totally expected them to start laughing, but they remained poker-faced. I knew the dogs they were talking about, as I'm generally terrified just walking passed the lodge gates. They are mental. The electric gates, complete with CCTV, are about 10" from the ground, so you can see the dogs growling and foaming at the mouth as they try to get free to kill you. The always remind me of Fluffy from Harry Potter. But the neds informed us: "don't worry, they're pets". I know, it keeps getting better. 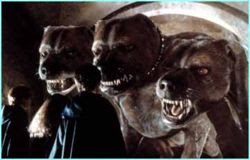 We were about 70% convinced it was a wind up, but we were obviously super cautious and super terrified. Thankfully I came up with an SAS-style plan. "Right, if the dogs appear, we should cuddle each other and hide our faces. Best not to run". WTF! Where do I get my stuff from? Even super-nice Sara looked like she wanted to push me off the hill. Note to self: Look up what to do in a dog attack.

Back on the main road, we passed the Lodge. They gates were closed, but there was no sign of the dogs. Was it a wind up?? The only things that made me think otherwise was the fact the neds-in-car literally came round the corner and stopped to ask. It wasn't like the saw us coming and thought it would be a laugh. Plus, they didn't laugh. And they drove away really slowly. And the dogs actually exist.

We completed the last two miles a bit shocked and slightly battered. Think I'll shelve that route for a while.
Posted by Debs M-C at 08:02

What a woose you are. If you are loking for a bull I know where to find one. I'll need to take you on my farmyard run. This link should take you to it on G-maps. It's a toughie but got the Millie seal of approval the other week.Some road but mainly trail and farmroads. And finishes climbing Red Road and Stonymollan Rd
http://www.gmap-pedometer.com/?r=2686268