It's been a long time coming...but I can FINALLY announce that I have been selected to represent Great Britain and Norther Ireland at the 9th IAU 24hr World Championship in Katowice, Poland on September 8-9, 2012.   To say I'm excited is an understatement.  Who wouldn't be?  I mean, have you seen the GB tracksuit ;-) Of course it's a great honour and a privilidge too! 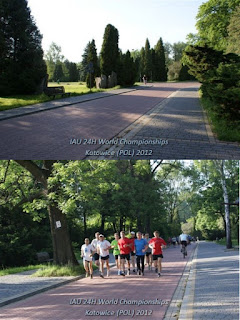 General information about the race course

THE IAU RACE PACK CAN BE DOWNLOADED HERE

The race starts at noon on Saturday, September 8. No prizes for guessing when it finishes! 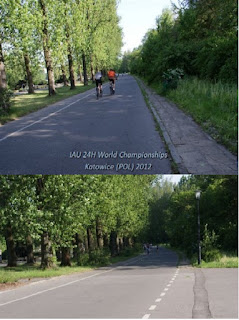 The course situated in Park Śląski in Chorzów (there will be prizes for pronouncing that correctly!) which is close to Katowice city centre.
The distance of the loops is 1.554,56m. Approximately ;-)
Elevation profile is + 6.4 meters and - 6.4 meters

I feel I have put enough miles in my legs this year and doing much more at this stage would tip me over to the darkside of overtrained.  I don't plan on grinding out anymore more long/slow runs, so I'm just concentrating on fitness and speed.

I've been working fairly hard this year on speed.  Still at the cow's tail of the boys-with-the-jet-propelled legs at the lunchtime group, but it's taking them that little bit longer before they're completely out of sight.

Before the trip to Poland takes the zip out of my legs, I thought I'd squeeze in a 5K Parkrun. I like the Parkrun in Strathclyde Park, because it's flat and got great PB potential - Although it's quite exposed to wind.  I had a good run a finished with a new PB  in 20:42 (ave 6:36m/m) and second female.

This Saturday, I'll be lining up for my 5th Devil o' the Highlands race.  I only secured a place two days ago, after being on the waiting list for a couple of months.  I thought I was going to have to go out and shoot myself a German!  Yes, the man who wonders why his name is prefixed with "crazy" is also running.

I've taking the day off work today to prepare for the race - facial, hair treatment, fake tan, defluffing :-)  I'm sure even Lizzy Hawker takes her racing so seriously.  I have, however, put lock laces in my Tempos for the final section.  To me, that's fighting talk!  Good luck to everyone running.

I would also like to congratulate everyone who ran in MONTANE Lakeland 100 and Lakeland 50.  Well done to Terry Conway who smashed his own record in 19:50 - over two hours ahead of second place.  Terry pulled out of last weekend 100K.  As I always say, everything happens for a reason.  I guess Terry will know the reason now.  Also huge congratulations to Scott Bradley, Dave Troman, JK and Andy Cole.
Posted by Debs M-C at 08:17

Congrats on your team GB selection. Great news. Brilliant 5k time too - av under 7 min pace is flying. Had to laugh at your 'no more long runs' comment, followed by 'I'm doing the Devil's'! That's not a long run, no? LOL. Best of luck for that too. Kaz.

Congratulations Debs, you're going from strength to strength. Have a nice Devil.

Congratulations on your GB Vest, with luck you won't have the tracksuit on much lol!

Huge congratulations Debs. I too laughed at the no more slow long runs, followed by you running the Devils. But for a star like you it will be neither slow or long! We will be cheering you on from home xx

Amazing blog with some relevant information about driving lessons bearsden. Thanks for sharing this...