As per my previous posting, I bowed out of participating in the Anglo Celtic Plate 100K...which turned our to wisest decision I've ever made.  The weather forecast predicted a warm day for the race, but the forecast fell short by quite a few degrees.  I would have been burst.


Plus, I could put my non-participation to good use by providing long overdue support for Sonic.  He had worked really hard - following months of injury - to secure a place on the Scotland team.  I've said it before, but Sonic is really slick on support, so his long-term injury came in quite handy for me last year ;-)  Actually, he only thought he was injured.  I just gave him a swift kick to the achilles every night, to keep him on back up :-) Kidding, obviously.  Anyway, he'd set the support standard and after last month's epic adventure he'd already raised the bar. 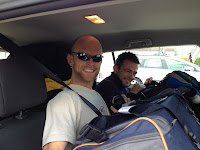 We flew down to Cardiff on Thursday, along with the Crazy Germans, the Gibbering Midget and Matt Williamson (the runner, not the designer).  We booked a seven-seater - dubbed the happy bus - for the weekend.  It was just that, seven seats.  No luggage space.  For runners who make Coleen Rooney look like a light packer  - The CG even had a whisk for heavens sake - this was the catalyst of the comical weekend.  Unsquashed running legs and drivering visibility are overrated anyway. 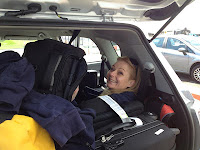 Friday evening was spent doing the Tesco dash and on Saturday morning we went down to have a look at the course.  The boys went for a run and the girls opted for the happy bus tour.  I wasn't long before the boys passed us though, as we were stuck behind a herd of cows sh*tting all over the road - with the GM dry boaking in the passenger seat.

After depositing the divas back at the hotel, Mrs Crazy German and I went out for a leisurely 18-miler.  We did an out and back on a lovely coastal path and then a random out and back on the circuit of the race course. It was most enjoyable, although we did feel guilty moaning about the heat...considering the pending drama.  I did get to try out my new UltrAspire TWITCH Bottle Waist Pack - awesome! - but I'll save that for another post.

On return to the hotel we discovered that the maid had tidied the Crazy Germans' room and had cleared out all the empty water bottles he had packed and carried from home. So Mrs Crazy German and I went on another Tesco dash to purchase bottles that met CGs very specific requirements. 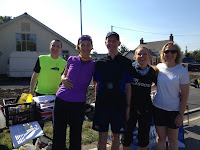 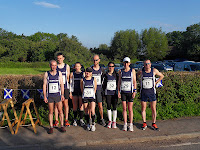 Race morning arrived - along with blue skies and blinding sunshine.  After we set up the Scotland camp, the runners were called to the start...and so it began.  32 laps of a two mile country road loop.

There were a total of 33 starters, including 23 internationals - with teams from England, Scotland, Wales and one from Ireland.

The first few laps were pretty easy, so we checked supplies and sorted buckets and sponges (which was the best idea ever!) and chatted with other teams.  We ended up adopting the Irish team, which consisted of one sole runner, Keith Whyte and one super-support, John Collins. 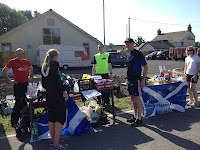 Although the forecast was for 21 degrees, I think it was closer to 26/27 in the sun - and there was no shelter/shade.  By mid-morning I expected the feed stations  to look like scene from Dawn of the Dead, but the runners really held it together.  There were, obviously, a lot of issues from overheating, salt loss and cramping, but there wasn't a single tantrum.  Although I have learnt that the CG can only speak German in races, so maybe there were a few cross words.  For a while, Irish John actually thought they were speaking Gaelic!

From the outset, there was a battle between between Keith Whyte (Ireland) and Allen Smalls (England), which lasted the duration. In the gals race, Emily Gelder, winner of the last two ACP events started like meant business and by half-way had a clear lead and was on target for 7.5 hours.  Second and third position was anyone's for the taking.


The Crazy German led team Scotland from the start, followed by Sonic, Matt and Gareth. And that was the order for the entire race.  There was a bit more leap-frogging in the girls team.

The Gibbering Midget was struggling to get into it from the first few laps.  She tried to quit on three occasions, but we managed to patch her up and send her out again, before she finally called time at 40 miles.  More deflated, than broken.  My sparkling motivation chat had run it's course, without even so much as a spat from the GM.  Although she did call me "Deborah" more times than I've even been called my Sunday name in my life.   I guess that's when I knew her word was final.

Later it became apparent that Izzy Knox - with boyfriend Stevie on support -  was going to be first Scottish gal.  The Izzy and Stevie show was worth the visit to Wales alone!  There's certainly no messing about with Stevie.  A policeman by day, he'd set up his support station like a F1 pit stop and was barking orders/demands - Move in to me. Hat off. Drink this. Eat that. Slow down.  - as Izzy approached. Izzy followed these orders quite willingly, although with a fair amount of back-chat. It was fantastic viewing.  Kind of like the ultra-running equivalent of Super Nanny tricks for taming wild children.  I felt a bit of an amateur in comparison, with my camera and £2 Tesco folding crate of supplies.

Although each of the nine runners had their designated support, it was pretty much all hands of deck.  Every time a runner came through there was a swarm of attendants trying in vain to ease the discomfort and cool their frazzled heads.  Water was becoming sparse - and disgustingly warm - and we were just grabbing what we could.  Bottles were cooling in buckets alongside sponges that had be used to wash down half the field! At the time, we adopted was what-they-don't-know-won't-hurt-them approach.  Dishing out supplies, hugs and high fives and wiping away sweat, tears and snotters, I probably had more DNA on me than an ten dollar whore!  It's not a sport for the precious. ﻿﻿﻿

Adrian Stott was the Scotland Team Manager and he just oozes experience as he jots down lap times and stats and analyses splits, pace and positions. I don't really do numbers, so even counting laps was taxing my brain. Adrian has even advanced his technological skills and was updating the virtual crowds on Twitter. Although his tweet to the masses stating that Sharon was "looking hot" evoked a few sniggers.

All our runners looked fantastic and they all dealt with the race in their own way.  Both Sonic and Matt were very relaxed and barely said a word. The CG flew past shouting in German (wearing a Scotland vest), Izzy was a bit more vocal and came out with some really random (but hilarious) stuff.  I forgot to ask her why she wanted to know how far away Essex was anyway.  Gail was always very smiley, Sandra is a wee tough cookie and lost so much salt her black tights became white.  I'm not sure she will forgive for putting a wet hotel flannel on her head and sending her out again..
﻿﻿
Gareth has had a fantastic year since he shook up the sharp end at the D33 in March. Well, he took out Grant Jeans.  He's been a littel demon, but you can only get away with so much and he started to flag as the race went on.  Fair play to him, because he really knuckled down to just grinding it out.  His hamstring was playing up and he starting stopping for a  bit longer every time he came round.  At one point he sat and drank a full cup of coffee, lapping up the rays for the what seemed like an hour.   I honestly thought he was done, but we all did a double take when he put down his empty mug and casually got up and started running again.  He did a couple of laps with Sonic - including the glory lap - and then did a few laps with Gail - including her glory lap - and then just jogged around and finished his own race.  Considerably slower than expected, but what a trooper.  He genuinely just looked happy to be there.  Although we kept sponging him down to cool him...until he told Sonic on his final lap "you run it first and keep them away from me with those bloody sponges"  Apparently he loves the heat and we were ruining the experience for him.  He was just too nice to say! 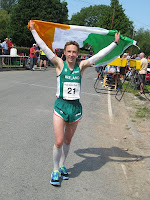 Huge congratulations (and respect!) to 26 runners who completed, let alone achieved a little bit of greatness. Especially to those in the open race. Why anyone would "volunteer" for that is beyond me.   The conditions were really tough - especially for my fair-skinned Celtic compatriots who were frying.  Some of the English team seemed to be getting more bronzed with every lap.  Except for Marcus Scotney who is really a Scot in an English vest :-) Keith Whyte should have one a special award just for his sunburn.  The arm sleeves he wore - to keep him cool - throughout the race left their mark.  He was burned in a reverse t-shirt style. Only an Irish man could go home with an inside out tan :-)

Very well done to Sonic on both his Scotland team and 100K debut.  7:51 is a fantastic time.  Not quite sure it's worthy of the 3D TV he treated himself to though...

Mick McGeoch wrote a fantastic race report, which can be viewed HERE. Scroll to the bottom of the page.

Great report Deborah! :-) It brings it all back!

Brilliantly written Deborah. As always. And special thanks for not mentioning broken fridges etc! Appreciated ;-)
Btw: A 7:51 is surely worth a 3D TV.
But no more the 32inch to be honest. I am sure Cairn can fix that tough!

Cu at the Devil's!

I like your blog having nice information.
driving lessons bearsden
Thanks for sharing.......